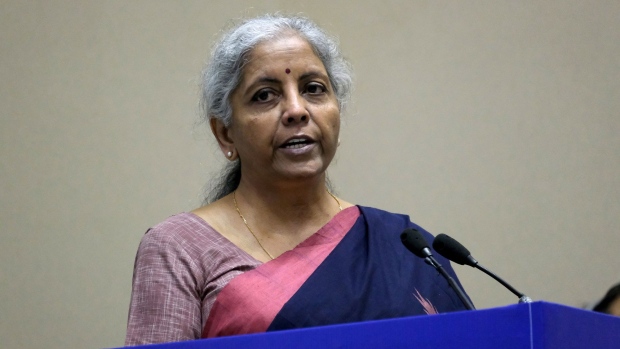 Nirmala Sitharaman, India's finance minister, at the inauguration of celebrations under the Azadi Ka Amrit Mahotsav initiative in New Delhi, India, on Monday, June 6, 2022. Approval ratings of Indian Prime Minister Narendra Modi’s government rose to the highest since the start of the pandemic though there's lingering concerns over the surging prices of essential items and unemployment, the latest survey showed on May 30. , Bloomberg

“External factors were very strong in the inflation-targeting exercise,” Sitharaman said Wednesday at a Reuters event, noting that they were beyond the control of the government and the Reserve Bank of India. “We expect currency volatility to settle on its own.”

India’s consumer price gains fell below 7% for the first time in three months in October. The RBI, which has raised its benchmark rate by 190 basis point this year, is expected to remain hawkish at a monetary policy review next week. Rate setters penned a letter this month to the government explaining their failure to contain inflation between 2% and 6% and outlined a road map for returning prices to target.

Sitharaman declined to describe specifics from the letter, but added that the government’s top three priorities for 2023 will be “growth, health and education.”

The finance minister’s comments come as authorities prepare the annual budget for February. That will be the final full-year budget before citizens elect a new prime minister in the summer of 2024, a time when Indian governments typically loosen their purse strings.

The finance minister said capital expenditure is a key way to drive growth. The government is offering incentives to firms that scale up manufacturing in India, hoping to capitalize on appetite to diversify operations away from China, she added.

“We are well on the course of meeting the capex target for this year,” Sitharaman said. “States have shown exceptional absorption capacity for taking the monies and spending them on capital assets. That is the only way we think we can sustain our growth because that is the sure-shot way of achieving the multiplier that the economy requires.”

Sitharaman also defended the use of foreign exchange reserves to address the volatility in the currency that toughed record lows about a month ago. ““All of us are confident that what has happened in terms of using reserves to contain the volatility was the right thing to do,” she said.

--With assistance from Adrija Chatterjee.