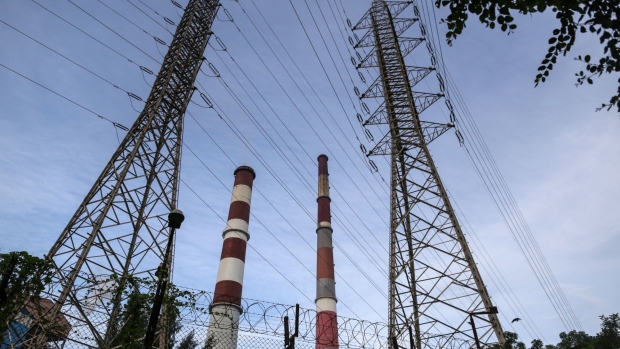 Electricity pylons and chimneys at the Tata Power Co. Trombay Thermal Power Station in Mumbai, India, on Wednesday, Oct. 6, 2021. India is grappling with an escalating crisis as stockpiles of coal, the fuel used to generate about 70% of the nation’s electricity, dwindle to the lowest in years just as power demand is set to surge. , Bloomberg

(Bloomberg) -- NTPC Ltd., India’s top power producer, is seeking to import coal for the first time in two years, underscoring worries about shortages even as a supply crunch slowly begins to ease.

The New Delhi-based company has issued a tender seeking 1 million tons of overseas coal, bid documents posted on the company’s website show. The fuel will mainly be used at power plants located far from domestic mines, which are most vulnerable to disruptions. A second tender, issued by NPTC on behalf of Damodar Valley Corp., also a state-run power producer, is seeking an additional 1 million tons.

India has been grappling with shortages of coal, used to produce about 70% of the nation’s electricity, since at least August, leading to curbs on power supply to some energy-hungry industries. A decision to enter the seaborne coal market, particularly at a time when global prices are surging, illustrates NTPC’s caution over the supply outlook.

Daily coal deliveries have started to rise and stockpiles at India’s power plants rose to 7.6 million tons on Wednesday, the highest level since Oct. 5, according to power ministry data. That’s still only about a quarter of the level a year ago, and equivalent to an average of four days of consumption.

In its tender, which closes Nov. 1, NTPC is seeking deliveries of thermal coal with gross calorific value of at least 4,700 kilocalories per kilogram. That, along with other requirements on moisture and ash content, suggest the coal could most likely come from Australia, according to Rahul Bhandare, chairman of coal trading firm Knowledge Infrastructure Systems.