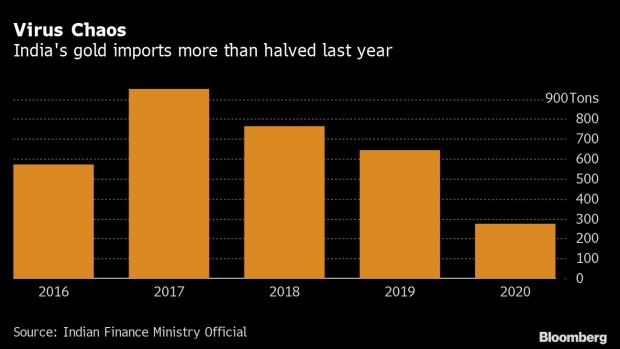 Customers shop for gold inside a Kalyan Jewellers store during the festival of Dhanteras in Noida, India, on Friday, Nov. 13, 2020. India's main holiday season -- culminating Saturday with Diwali, the festival of lights -- appears to be giving a much needed boost to demand, with online retail sales to business activity indicators signalling Asias third-largest economy is recovering. Photographer: Prashanth Vishwanathan/Bloomberg , Bloomberg

(Bloomberg) -- Gold demand in the world’s second-biggest user will rebound this year after collapsing in 2020 as the rollout of vaccines pushes life back closer to normal, according to the World Gold Council.

Some of the weddings and festive buying that had been postponed because of the pandemic will come back in 2021, and this pent-up demand will boost sales, P.R. Somasundaram, managing director for India at the London-based council, said in an interview to Bloomberg TV.

“In 2021, you will see a big spurt in demand,” barring any unforeseen factors, Somasundaram said. Historical data show that after plunging in 2009 following the financial crisis, Indian demand jumped back up in the next three years, he said.

Demand in India, which trails only China, slumped in 2020 as the pandemic restricted movement and hit logistics, while higher prices drove buyers away. Imports more than halved to 275.5 tons last year, a person familiar with the data said last week. That put inbound shipments at the lowest in WGC’s records going back to 2009.

Even before the pandemic hit, demand in India had been losing ground as transparency measures taken by the government changed buying behavior. Still, gold’s allure remains strong as Indians have a cultural affinity for the metal and prefer it for weddings, Somasundaram said, adding that rules out bitcoin as a big threat in the country.

But the gold industry needs to innovate to appeal to millennials, who have an aversion to heavy jewelry, or risk losing out on demand from the newer generation, he said.