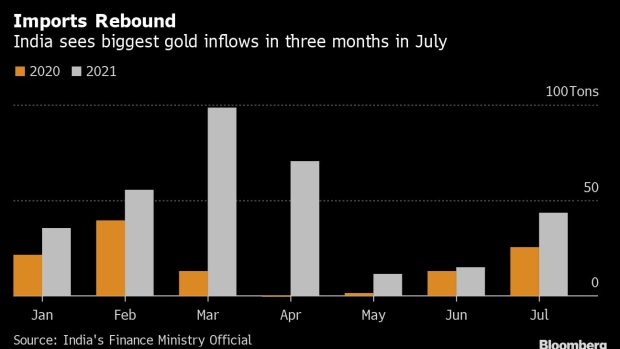 An employee displays gold bracelets inside a Kalyan Jewellers store during the festival of Dhanteras in Noida, India, on Friday, Nov. 13, 2020. India's main holiday season -- culminating Saturday with Diwali, the festival of lights -- appears to be giving a much needed boost to demand, with online retail sales to business activity indicators signalling Asias third-largest economy is recovering. Photographer: Prashanth Vishwanathan/Bloomberg , Bloomberg

(Bloomberg) -- Gold imports by India jumped to the highest in three months in July as economic activity picked up after a deadly coronavirus wave abated, and prices in the second-biggest consumer softened.

Inbound shipments surged 71% from a year earlier to 43.6 tons last month, according to a person familiar with the data, who asked not to be identified as the information isn’t public. That’s the biggest inflow since 70.3 tons in April. Finance Ministry spokesman Rajesh Malhotra didn’t immediately respond to calls to his mobile phone.

Indian states have slowly removed many restrictions on businesses and the movement of people as virus cases receded after peaking in May. The increased footfalls at stores and a nearly 5% fall in local prices this year has also revived sales.

India’s gold demand is expected to be stronger in the second half of 2021 compared with the prior six months due to softer prices and more occasions such as festivals and weddings, when jewelry is traditionally bought, P.R. Somasundaram, regional chief executive officer for India at the World Gold Council, said last week.