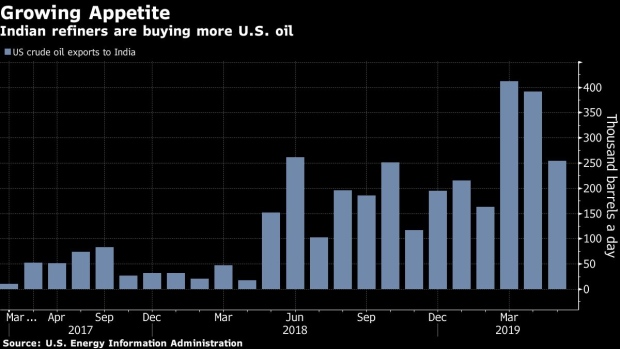 (Bloomberg) -- An Indian state-owned refiner has swooped in to buy American oil that was en route to China but due to arrive after new tariffs kicked in.

Bharat Petroleum Corp. bought one or two cargoes of U.S. crude that were recently diverted from its original destination of China, Refineries Director R. Ramachandran said in an interview. He didn’t identify the seller, how big the shipments were, or the name of the ships. It’s possible BPCL could buy more American oil that was headed to China, he said.

Beijing announced it would impose the 5% levies -- the first ever Chinese tariffs on U.S. oil -- on Aug. 23 and they took effect Sept. 1. Six tankers carrying about 12 million barrels of U.S. crude were on the way to China at the time of the announcement. At least one of those vessels arrived before the deadline, while another ship may have offloaded its cargo at a port near Qingdao before the tariffs took effect.

Unipec -- the trading arm of China’s state-owned oil giant Sinopec -- offered U.S. crude that couldn’t arrive in the Asian country before Sept. 1 in late August. At least three potential Asian buyers received offers from Unipec, according to people with knowledge of the matter.

Indian refiners have increased their purchases of American oil this year as supplies from Iran and Venezuela were hit by White House sanctions. The Asian nation bought an average of 287,000 barrels of U.S. crude a month in this year through May, compared with a monthly average of 131,000 barrels in 2018, according to Energy Information Administration data.

China was the biggest foreign buyer of American crude as recently as the middle of last year but imports were subsequently slashed as the trade dispute worsened. Purchases picked up again this year, reaching 1.5 million tons in July, data from the General Administration of Customs show.

(Updates with chart and data on U.S. oil exports to India in fifth parapgraph.)

--With assistance from Heesu Lee.

To contact the reporter on this story: Dhwani Pandya in Mumbai at dpandya11@bloomberg.net