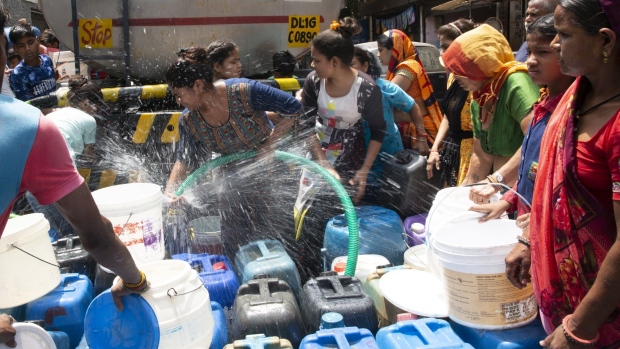 A man drinks water from a public water dispenser, locally called 'Piyaoo" in New Delhi, India, on Sunday, May 1, 2022. India is experiencing a heat wave, with the country’s average temperature reaching almost 92 degrees Fahrenheit (33 degrees Celsius) in March, the highest on record for the month since authorities started collecting the data in 1901. , Bloomberg

Temperatures in the gritty New Delhi locality of Mungeshpur averaged 1.4° Celsius higher so far this month than in the suburban enclave of Safdarjung, data from the India Meteorological Department shows. Many factors can drive temperature variance between neighborhoods including wind patterns, but the presence or absence of healthy vegetation also plays a key role.

Population density and access to water are some of the factors that contribute to the distribution and health of greenery, said Brent Jacobs, research director at University of Technology Sydney’s Institute for Sustainable Futures. Disadvantaged areas trying to accommodate lots of people often end up with more hard surfaces like concrete that radiate the sun’s heat into the surrounding air, boosting temperatures, he said.“People generally want to blame the climate change impact for the effect it has on the communities they are living in. But of course it’s got to do with all kinds of non-climate issues around vulnerability and disadvantage,’’ Jacobs said. “If there is already a weakness in the system climate change will find it and make it worse.”Temperatures in the Safdarjung neighborhood tend to be cooler because there are more open areas with vegetation and building density is lower, said Ajit Tyagi, former chief of the India Meteorological Department. Land-use factors play a key role in temperature variance and a higher density of buildings can add to the heat island effect, said Tyagi, who is currently a member of the World Meteorological Organization’s Working Group on Tropical Meteorology Research.

Read more: What It’s Like to Live Through India’s Record-Breaking Heat Wave

To be sure, not all disadvantaged neighborhoods in New Delhi are devoid of cooling green spaces. Aya Nagar, in southwest Delhi, which is adjacent to a golf club and has significant greenery around its core urban development, averaged just 0.3°C higher than Safdarjung, the weather office data shows.Since March, aside from brief days of respite, extreme heat has afflicted northern and central India — a region with more than 1 billion people.

The problem of extreme temperatures that last for weeks on end will only get worse as rising levels of greenhouse gases continue to trap more heat in the atmosphere, and it will be compounded by the arrival of more people to crowded cities in India and elsewhere. India’s urban population is expected to double by 2050 — and so too is the loss of productivity from people unable to work in the heat.