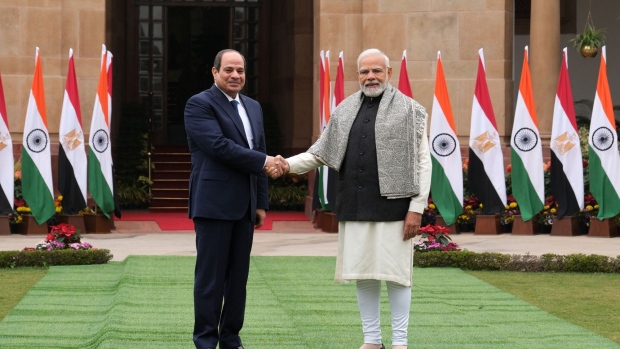 India and Egypt elevated their relationship to a strategic partnership and agreed to substantially increase bilateral trade as the South Asian nation looks for new markets, including for its military hardware.

Trade between India and Egypt will touch $12 billion annually in the next five years, Prime Minister Narendra Modi said in New Delhi at a joint press conference with visiting Egyptian President Abdel Fattah El-Sisi. Trade between the two countries stood at $7 billion in the financial year ended March 2022.

Food and fertilizer shortages, supply chain disruptions because of the Ukraine war and the Covid pandemic figured prominently in the discussions, Modi said.

Sisi will be the first Egyptian head of state to attend India’s Republic Day parade on Jan. 26 as a special guest. Egypt is also a special invitee at the Group of 20 Summit as India begins its leadership of the grouping this year. Modi has rallied support for the nations of the Global South during his presidency of the grouping.

That’s because, Egypt as the host of the Arab League — an inter-governmental grouping of all Arab states in the Middle East and North Africa — and home to the Al-Azhar Islamic seminary, commands influence in the region.

The Egyptian Air Force is looking to replace its old fleet and has shown interest in the Indian-made light combat aircraft, Tejas. India has also offered Egypt its light combat helicopter.

In recent years, India has sought closer ties with the US and its western allies to counter an economically- and militarily-assertive China, often at the expense of its engagement with developing countries. New Delhi is now looking to fix that balance.