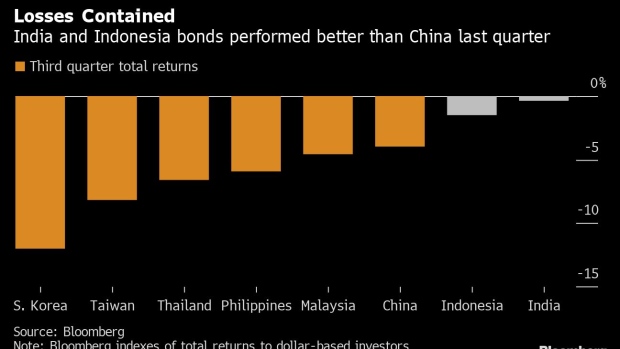 Residential buildings, back, in the Tanah Abang area of Central Jakarta, Indonesia, on Monday, Aug. 22, 2022. Indonesia is expected to continue bucking the trend of monetary policy tightening although signs that the government may boost fuel prices could convince the central bank to signal a readiness to act to tame inflation. , Bloomberg

The two countries’ sovereign debt only lost 0.4% and 1.5% respectively for dollar-based investors in the third quarter, less than other emerging markets in Asia including China, according to data compiled by Bloomberg. They knocked China off the top spot as the best performer in the region.

“Amid the global selloff in the third quarter, the higher yields on Indonesia and India bonds have provided a bigger offset to bond price losses,” said Duncan Tan, a rates strategist at DBS Group Holdings Ltd.

Indian and Indonesian notes have the widest spreads in emerging Asia, helping to shield investors from the turmoil in US Treasuries, which had the longest string of quarterly losses in almost a decade.

They offer an alternative to China, which had previously been considered a safe haven amid extreme rate fluctuations. The world’s second-biggest economy hasn’t seen the scale of foreign inflows observed last year as Chinese 10-year yields have largely remained below those on Treasuries since April.

“Relative resiliency in their currencies was also key, with the rupiah continuing to benefit from the commodity tailwind and the rupee supported by larger Reserve Bank of India intervention,” Singapore-based Tan added.

The rupiah and the rupee were the top performing emerging Asian currencies in the three months to September. Indonesia will release September foreign-reserves data on Friday, and India’s latest figures will be published the same day.

And local dynamics have played an important role in supporting the outperformance of India and Indonesia debt. That’s a marked change from the 2013 taper tantrum when both nations were included in the “Fragile Five,” a term coined by Morgan Stanley for economies with excessive short-term inflows and high growth rates.

India’s notes have been supported by foreign inflows and signs that the market is nearing the peak in the rate hike cycle. Another positive is the prospect of inclusion into global indexes, although JPMorgan Chase & Co. said this week it would hold off from adding India to its EM sovereign bond index for now.

Indonesian debt has been buoyed by fiscal consolidation measures and relatively better-contained inflationary pressures. Inflation and the rupiah’s trajectory will be key determinants for Bank Indonesia policy, said Lim Yee Ping, an economist with CIMB Bank Berhad in Kuala Lumpur.

One other key factor is that Asia’s higher yielding currencies also appear less sensitive to hawkish US bets, especially the Indian rupee which has the most inverse correlation to two-year US yields in emerging Asia. Along with the fatter premiums over Treasuries, that adds to the positive outlook.