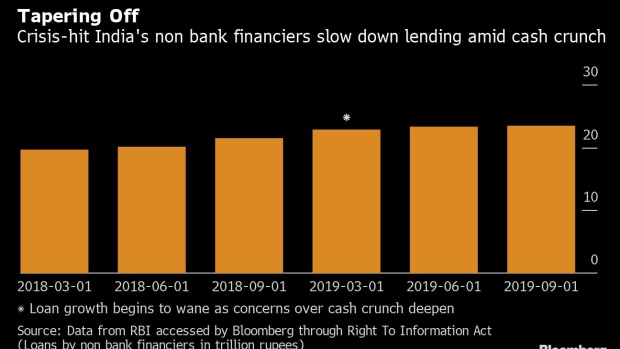 The portrait of Mahatma Gandhi is displayed on an Indian 50 rupee, left, and 2000 rupee banknotes in an arranged photograph in Bangkok, Thailand, on Wednesday, Sept. 12, 2018. India's rupee dropped to a record low before trimming last week's loss; the government unveiled measures to prop up the sagging currency, including steps to facilitate bond issuance by local companies and possible curbs on imports. Photographer: Brent Lewin/Bloomberg , Bloomberg

(Bloomberg) -- Indian Prime Minister Narendra Modi’s government is considering easing lending rules for shadow banks, according to people familiar with the matter, a move that would give the cash-starved financiers access to funds.

Modi’s cabinet is likely to discuss allowing state banks to provide so-called credit enhancement against securities rated BBB+ to non bank financiers, the people said, asking not to be identified before a public announcement. That’s the fifth level below what’s permitted under the current plan.

The government is keen to revive credit growth and spur Asia’s third-largest economy, which expanded at the slowest pace in six years in the quarter to Sept. 30. More than a year after the collapse of Infrastructure Leasing & Financial Services Ltd., shadow lenders have been reeling from a cash shortage that’s hurt expansion plans and stalled trade finance at small to medium-sized companies.

The current plan allows state banks to buy as much as 1 trillion rupees ($14 billion) of performing assets from AA rated pools of non-bank companies and any default up to 24 months from the date of purchase of the asset will be made good by the government.

To contact the reporter on this story: Siddhartha Singh in New Delhi at ssingh283@bloomberg.net

To contact the editors responsible for this story: Marcus Wright at mwright115@bloomberg.net, Arijit Ghosh, Jeanette Rodrigues