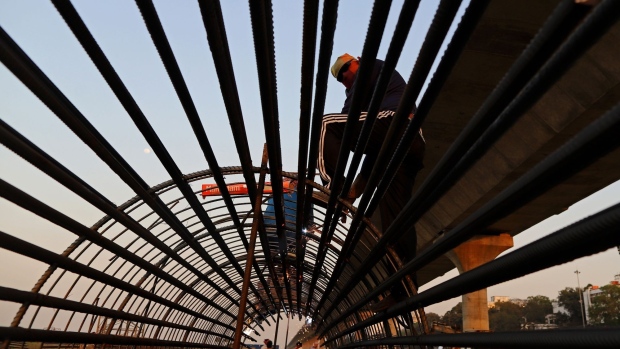 Workers labor on reinforcing steel at a flyover construction site in Patna, Bihar, India, on Thursday, Feb. 25, 2021. After falling into a coronavirus-fueled recession in the third quarter, India's economy has likely returned to expansion in the three months ended December, according to the median estimate in a Bloomberg survey of economists. , Bloomberg

(Bloomberg) -- India’s trade deficit widened the most on record last month as high global commodity prices further raised the import cost of goods such as oil and gold.

The gap between exports and imports rose to $25.63 billion in June, from $24.3 billion in May, preliminary data released by the Commerce Ministry showed Monday.

Imports jumped 51.02% in June from a year ago, while exports rose 16.78%. Inbound shipments of petroleum products during the month climbed to $20.73 billion, and gold imports rose to $2.61 billion.

The latest data comes after the government Friday tightened oil exports and import of gold in an effort to rein in a worsening deficit and tame rupee’s record fall.

Asia’s third largest economy imports about 85% of its annual oil requirements. Dollar outflows due to rising global commodity prices and a depreciating rupee are stoking inflation and hurting government finances.