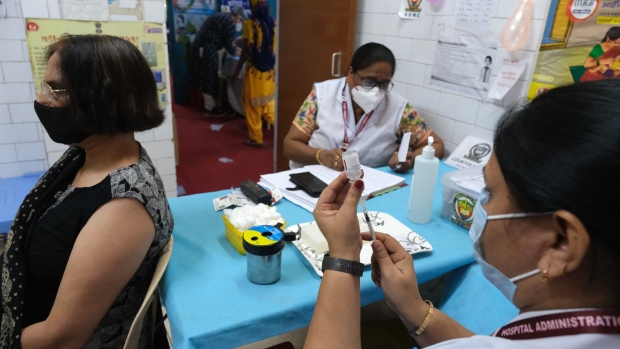 (Bloomberg) -- India’s milestone of administering a billion Covid-19 vaccines will boost optimism across various sectors of the country, including the economy, Prime Minister Narendra Modi said in a national address.

“This is not only a number, it reflects the country’s capacity and writes a new chapter in history,” Modi said in a televised speech Friday. “Experts and agencies are optimistic about India’s economy.”

“Now not only are record investments coming to Indian companies, employment opportunities are being created for the youth,” he added.

His speech came a day after India reported having crossed the milestone, more than nine months after the country started its vaccination program. About 31% of the adult population has been fully vaccinated, while more than three-fourth have had one dose.

Still, with India’s size and population of nearly 1.4 billion, the country’s vaccine drive has some distance to cover. The wide disparity between the two doses mean there are large swathes of India’s population that could be still vulnerable to Covid-19.

The prime minister warned caution and asked people to follow social distancing and masking protocols as the country heads into the Hindu festival season over the next few weeks.

The government aims to vaccinate all adults by the end of this year.