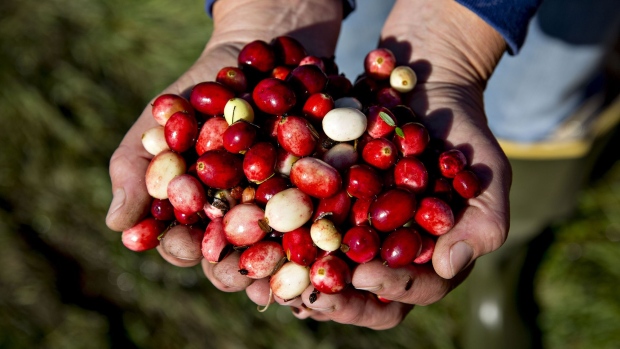 Cranberries are displayed for a photograph during harvest in Camp Douglas, Wisconsin, U.S., on Wednesday, Oct. 18, 2017. The 2017 harvest is expected to reach 5.6 million barrels, more than half of all the cranberries harvested in the U.S., which is expected to be about 9 million barrels, according to the Wisconsin State Cranberry Growers Association. Photographer: Daniel Acker/Bloomberg , Bloomberg

(Bloomberg) -- Terms of Trade is a daily newsletter that untangles a world threatened by trade wars. Sign up here.

India is open to greater market access for American farm and dairy products and lower duties on Harley-Davidson Inc. motorcycles as it seeks to conclude a trade deal with the U.S. in time for President Donald Trump’s scheduled visit next week, according to people with knowledge of the matter.

New Delhi is willing to allow market access for U.S.-produced cranberries, blueberries, pecan nuts and avocados at lower duties. Also on the cards is allowing some imports of dried distilled grains soluble, a by-product of ethanol production used in animal feed and alfalfa hay, a plant used for fodder, said the people, asking not to be identified citing rules.

Even as talks are on between the two nations to have some sort of a deal on the table ahead of Trump’s state visit on Feb. 24-25, there is no clarity yet on when a final agreement will be ready, the people said, adding that work was still underway on the finer details, which aims to resolve long-pending issues on both sides.

Trade talks between Washington and New Delhi have been stalled since before Prime Minister Narendra Modi’s U.S. visit in September.

A trade deal, even a small one, with New Delhi comprising greater market access for the U.S. is likely to help Trump further consolidate his position in an election year. He’s fresh off the success of having signed a ‘phase one’ agreement with China last month as well as the United States Mexico Canada Agreement or USMCA deal.

India has also yielded ground on an issue that Trump has championed by agreeing to cut import duties for Harley-Davidson motorcycles by creating a separate tariff classification for them.

New Delhi has also indicated its willingness to relent on domestically sensitive issues like price caps on medical devices and market access to U.S. dairy products.

Washington though is yet to blink on several issues which are of interest to India including exemptions from high steel and aluminum tariffs, the people said. So far, it has indicated easing rules to provide greater market access for Indian grapes, mangoes and pomegranate arils along with slashing import duty for these items. The restoration of an exception that had allowed India duty-free exports of about 2,000 products until last year, is also on the cards. This tops India’s agenda because of its competitiveness with low-cost rivals.

Trade Ministry spokesman Yogesh Baweja declined to comment on the matter. The spokesperson for the office of the United States Trade Representative was not immediately available for comment because of a public holiday.

Trade talks between the two sides have been in limbo largely because the Americans have been adding new items during negotiations, the people said. These include India’s proposed policy for e-commerce, its data protection bill and U.S. companies MasterCard and Visa being treated at par with government-backed RuPay. This has made it difficult for the Indian side to conclude negotiations, they said. New Delhi has signaled willingness to discuss any new issues once an initial pact is finalized.

U.S.-India bilateral trade was at $88 billion in the year ended March 2019, with New Delhi running a surplus of $17 billion. That surplus has been narrowing since 2017 after India started buying more oil, natural gas and coal, drones and aircraft from America.

To contact the reporter on this story: Shruti Srivastava in New Delhi at ssrivastav74@bloomberg.net

To contact the editors responsible for this story: Ruth Pollard at rpollard2@bloomberg.net, Muneeza Naqvi, Karthikeyan Sundaram