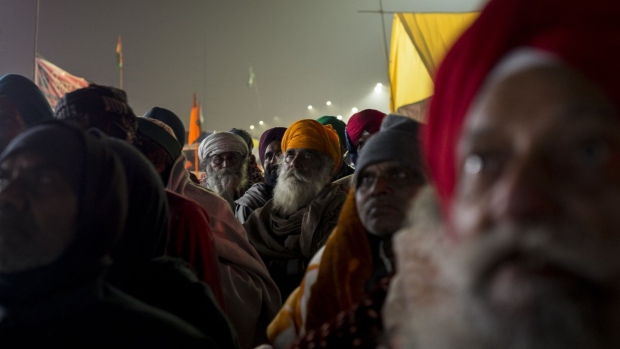 (Bloomberg) -- India has offered to suspend three new contentious agricultural laws for up to 18 months, a significant step down for Prime Minister Narendra Modi’s administration as it struggles to end nearly two months of protests by farm groups.

Agriculture Minister Narendra Singh Tomar made the offer during talks with farmer unions on Wednesday in New Delhi. During this period farm leaders and the government can begin discussions to find a lasting resolution to the differences between both sides on the new legislation, the agriculture ministry said in a statement.

The implementation of the three laws has already been put on hold by the Supreme Court till further orders and a panel of experts has been formed to resolve the deadlock. But protest leaders have refused to appear before the panel and said their demand for a total repeal of the laws stands.

On Thursday some farm leaders once again appeared to push away the government’s latest offer.

“It’s an effort to quell the farmers’ protests and not a sincere move to resolve the issues,” said Avik Saha, organizing secretary of the All India Kisan Sangharsh Coordination Committee, adding that, “keeping the laws in abeyance doesn’t achieve the purpose for which farmers are agitating.”

The farm groups are meeting later Thursday to discuss their next course of action. The next round of talks with the government is slated for Friday.

A spokesman for the prime minister’s office wasn’t immediately available for comment.

Tens of thousands of farmers have been camping out at several entry points to the capital New Delhi since late November in protest against the legislation that they say will hurt farm incomes and leave them vulnerable to big corporations. The Modi government has defended the laws, saying the reforms will make farming competitive, provide options to farmers and bring prosperity to them.

The protesters have also said they plan a rally in the Indian capital that would run at the same time as Republic Day celebrations on Jan. 26.