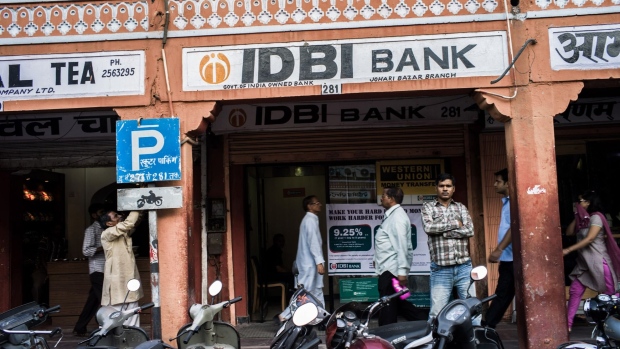 A pedestrian walks past an IDBI Bank Ltd. automated teller machine (ATM) branch in Jaipur, Rajasthan, India, on Wednesday, Oct. 3, 2012. The Indian economy will expand 5.6 percent in the year through March 2013, the weakest pace in a decade, according to forecasts released yesterday by the Asian Development Bank. Photograph: Sanjit Das/Bloomberg , Bloomberg

(Bloomberg) -- India has invited bids to sell 60.72% in state-backed IDBI Bank Ltd., according to an expression of interest floated by the finance ministry on Friday, as it seeks to ramp up its privatization drive.

The federal government and the state-owned Life Insurance Corp. of India together own about 95% in the lender. The government will sell 30.48% of its stake in the bank, while LIC will offload 30.24%, along with transfer of management control.

The proposed sale of the lender, which has a market value of about 459 billion rupees ($5.6 billion), would energize the government’s privatization plans and bolster its finances as it seeks to mop up 650 billion rupees from asset sale this year. It has already raised more than a third of the target, primarily from the $2.7 billion initial public offering of LIC. Last year, it missed the aim after failing to push through big-ticket assets sales including privatization of state-run refiner Bharat Petroleum Corp.

Listed private banks, foreign banks, non-banking financial companies, and alternate investment funds are among those eligible to bid, while large corporate houses and individuals have been kept out, the government said.

The acquirer would have to bring down the equity to 26% in 15 years and in the first five years, 40% of the equity capital would be locked in as per central bank guidelines.

Bidders need to have a minimum net worth of 225 billion rupees and must have reported profits in at least three out of the last five financial years. The last date for submission of bids is Dec. 16.

Rushing to sell Indian state-run lenders to private investors may hinder the government’s financial inclusion efforts and monetary policy transmission, staff at the country’s central bank warned in a research paper released in August. The RBI has largely stayed silent on the sale plans so far.