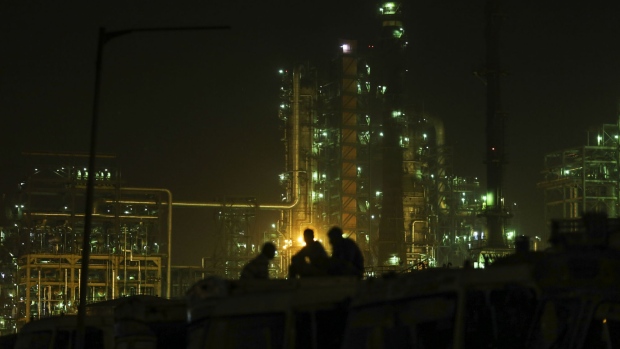 (Bloomberg) -- Indian oil refiners that have cranked up processing rates in response to a rebound in fuel demand have a seasonal boost to look forward to that not even a rapidly spreading virus is expected to derail.

The nation’s two main festivals -- Navratri and Diwali -- start mid-October and extend for more than a month, typically increasing demand for consumer goods with more diesel-guzzling trucks hitting the road to deliver everything from clothes to refrigerators. This may lead to refiners boosting already elevated crude processing rates further to meet rising fuel consumption.

Indian Oil Corp., the nation’s top processor, is currently operating its refineries at an average rate of 86% of capacity, compared with 66.7% in August, said a company official who asked not to be identified as the information isn’t public. Bharat Petroleum Corp. is at more than 85%, while Hindustan Petroleum Corp. is already at full capacity, according to company officials.

While China has made strides in containing the pandemic and led the global recovery in fuel demand after lockdowns, India has had far less success in containing the virus with infection rates surging above seven million. However, despite rising cases, people are resuming their daily activities and are even preparing to celebrate the festivities in a big way.

“I doubt there is any fear of the virus,” said K. Ravichandran, senior vice-president at credit assessor ICRA Ltd., the local unit of Moody’s Investors Service. “Crowds are thronging beaches and malls. It may not be back to normal, but people are really loosening the purse strings and you can see the pick up in consumption across sectors.”

Across India, overall crude-processing rates at oil refineries are currently above 85% of capacity and inching toward 90%, up from about 76% in August. Gasoline has so far led an uneven fuel rebound as more people opt for their own cars or scooters over public transport to avoid being infected.

Diesel consumption is poised for a much needed boost from the festivities, crop-harvesting activities, as well as stimulus that includes a special interest-free festival advance of up to 10,000 rupees ($136) for each federal government employee.

“Diesel recovery is inching toward normal and the festivals and harvesting seasons will boost demand further,” said R. Ramachandran, the former refineries director at Bharat Petroleum who has almost four decades experience in the Indian refining industry. “Festival season adds at least 10% to India’s overall fuel demand as compared to the rainy season.”