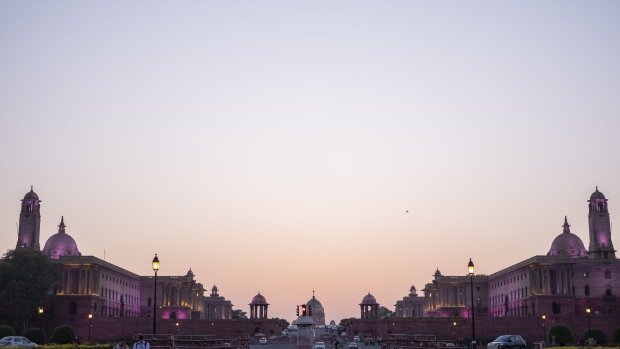 Police barricades near the South Block of the Central Secretariat buildings, left, which houses the Prime Minister's Office and the Ministries of Defence and External Affairs, and the North Block, right, which houses the Ministries of Finance and Home Affairs, India, on Friday, March 26, 2021. Prime Minister Narendra Modi is rebuilding part of New Delhi, but the mammoth undertaking is drawing fire because it’s estimated to cost billions at a time when the nation is grappling with a devastating coronavirus outbreak and the economic fallouts of local shutdowns. Photographer: Prashanth Vishwanathan/Bloomberg , Bloomberg

(Bloomberg) -- Indian finance ministry officials plan to pitch for a sovereign rating upgrade from Moody’s Investors Service when it meets with the firm, scheduled for Sept. 28, according to people familiar with the matter.