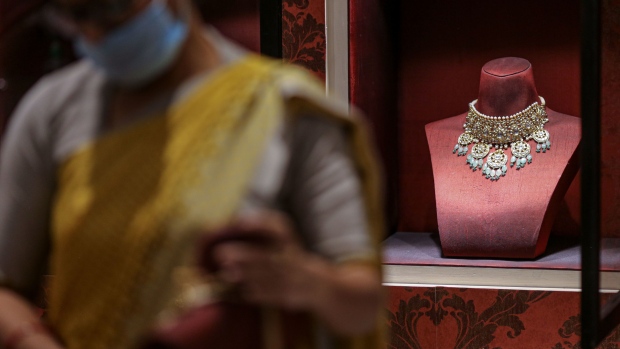 A gold necklace displayed inside a Titan Co. Tanishq jewelry store during the festival of Dhanteras in Mumbai, India, on Tuesday, Nov. 2, 2021. Indians flocked to jewelry stores on the biggest gold-buying day of the year, with a bumper sales period for precious metals that culminates in the festival of Diwali expected for the first time since the pandemic began. , Bloomberg

(Bloomberg) -- India increased its import tax on gold in a surprise move that aims to reduce inflows to the world’s second-largest consumer, after the country’s ballooning trade gap pushed its currency to a record low.

The import duty on gold was increased to 12.5% from 7.5%, according to a government notice dated June 30. This is a reversal of last year when India cut the tax to 7.5% in the federal budget.

The tax increase comes even as a shortfall in India’s current account -- the broadest measure of trade -- is expected to probably widen to 2.9% of gross domestic product in the fiscal year ending March 31, according to a Bloomberg survey in late June, nearly double the level seen in the previous year.

India’s gold purchases had been picking up in the past year after buying slumped during the pandemic and the country had imported the most gold in a decade in 2021, according to the World Gold Council.

Indians consider gold to be auspicious and a store of value, and the country relies entirely on imports to meet demand.