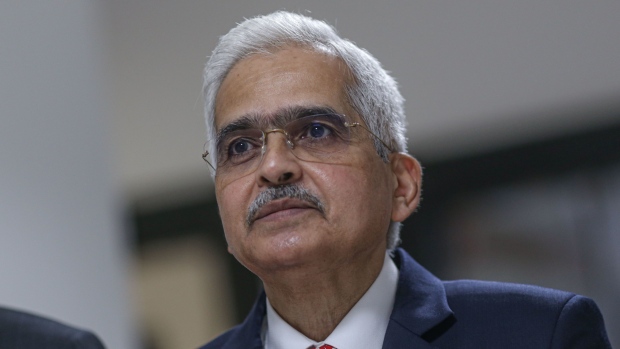 (Bloomberg) -- India’s central bank returned borrowing costs to pre-pandemic levels and pledged to do “whatever it takes” to bring inflation back to target, reiterating a hawkish stance that sent bond yields and the rupee higher.

Governor Shaktikanta Das’s comments Friday after the monetary policy committee’s second half-point hike in as many meetings signaled the Reserve Bank of India isn’t done with tightening rates yet. The benchmark repurchase rate now stands at 5.40%, a level last seen in August 2019.

Sovereign bonds declined after the decision, which surprised most economists who had expected the move to be less than 50 basis points. The 10-year yield rose as much as 11 basis points, while the rupee gained 0.5% to 79.0950 to a dollar. Stocks traded higher.

“Inflationary pressures are broad based and core inflation remains elevated,” Das said in a livestreamed address from Mumbai, noting that price gains will remain above the RBI’s 2%-6% tolerance level in the year to March. “It’s now basically a whatever-it-takes approach going into third year in succession.”

The RBI’s signal dispels a notion gaining currency that central banks everywhere may be nearing the end of their tightening cycle. While Reserve Bank of Australia Governor Philip Lowe suggested that size and timing of future hikes will depend on incoming data, Cleveland Federal Reserve President Loretta Mester said Wednesday that US rates need to be raised until high inflation subsides.

“The implicit message is that rates are yet to reach neutral territory, and that more rate hikes are warranted – a view that we agree with,” said Aurodeep Nandi, an economist at Nomura Holdings Inc.

A weaker rupee, as also uneven monsoon rains -- crucial for India’s crop output and stable food prices -- add to the RBI’s worries on inflation. The currency has lost nearly 7% of its value year-to-date amid foreign fund outflows and record trade deficit.

Still, the central bank maintained its forecasts for economic growth at 7.2% and inflation at 6.7% in the year ending March.

“The Reserve Bank of India isn’t taking any chances on inflation -- the surprisingly big 50-basis-point hike shows its focus is still squarely on reining consumer prices back into its target range, even at the expense of a hit to growth.”

Das also said the RBI will remain watchful and maintain the stability of rupee, which dropped past 80 a dollar in July.

“Market interventions by the RBI have helped in containing volatility and ensuring orderly movement of the rupee,” he said, while assuring currency traders wary of depreciation pressures due to worsening external deficit that the current account gap remains within sustainable limits.

The central bank has run down its reserves by at least $62 billion this year, in addition to raising its benchmark interest rate by 140 basis points since May.

“The unexpected USD strength and stubborn inflation led to the higher hike,” said Naveen Singh, head of trading at ICICI Securities Primary Dealership Ltd. “Yields may inch up as terminal rate expectation is back to 6% from 5.5%.”

Yields had eased in recent weeks on hopes that the central bank may signal a cut in inflation forecasts amid easing global commodity prices.

“It is not good for markets, because the hike was unanimous and the quantum was large since a 35 basis points hike was largely expected,” said Debendra Dash, head of fixed income at AU Small Finance Bank. “I think market yields will not come down in a hurry.”