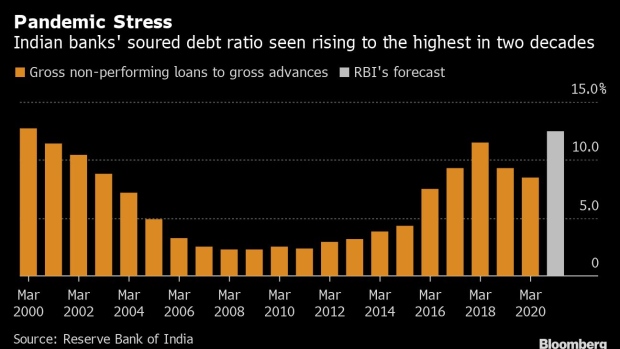 (Bloomberg) -- The Reserve Bank of India’s policy decision this week is a tricky one to call, with economists split over whether Governor Shaktikanta Das will lower interest rates again to support a fragile economy and banking sector in the face of above-target inflation.

Of the 42 economists surveyed by Bloomberg, 21 expect a 25 basis-point rate cut on Thursday, one projects a 50-point move and the rest see no change. Das has already led the Monetary Policy Committee in cutting interest rates by 115 basis points this year, taking the repurchase rate down to 4%, the lowest since it was introduced in 2000.​

Das has recently turned his attention toward the fragile financial sector amid forecasts for a sharp rise in bad loans. Those concerns could outweigh inflation risks and prompt a rate cut this week, said Kaushik Das, chief India economist at Deutsche Bank AG in Mumbai.

“The benefit of a front-loaded 25 basis-point rate cut in the August policy is significantly higher in the backdrop of elevated financial stability risks and a worrying non-performing asset outlook, in our view, as against any potential risk to inflation,” he said. A rate cut would also help lenders if the RBI doesn’t extend a moratorium on loan repayments beyond August.

Here’s what to watch out for from the MPC statement:

The RBI’s target is to keep inflation in a range of 2%-6%, but consumer-price growth has exceeded the upper end of that band for most of the past two quarters. Part of the reason has been higher food, fuel and gold prices as well as supply-side constraints due to the lockdown. Given the upward surprise, the RBI may revise its forecasts higher: in May, it projected inflation would ease in the second half of the fiscal year toward the 4% midpoint.

“If activity remains subdued and the seasonal spike in vegetable prices reverses over the next few months, the RBI is likely to cut rates in the fourth quarter of 2020,” said Pranjul Bhandari, chief India economist at HSBC Holdings Plc in Mumbai, who expects no rate change this week.

In a recent speech, Das said that while there were some signs of a pick up in activity due to the staggered easing of a lockdown, there was a large degree of uncertainty. High-frequency data shows the recovery was fragile in June with momentum probably fading in July amid a surge in virus cases. That’s likely to reinforce economists’ estimates for a GDP contraction of 5.2% in the year through March 2021.

The RBI has pumped billions of dollars into the financial system to encourage banks to lend more, yet loan growth has been languishing because of the economy’s slump. A recent central bank report showed that gross non-performing asset ratio is expected to jump by 4 percentage points to 12.5% if the economy contracts by 4.4% this year.​

Investors are looking for assurances that liquidity will be in surplus and that the RBI continues its secondary market bond purchases and yield curve control measures to absorb a record government borrowing program.