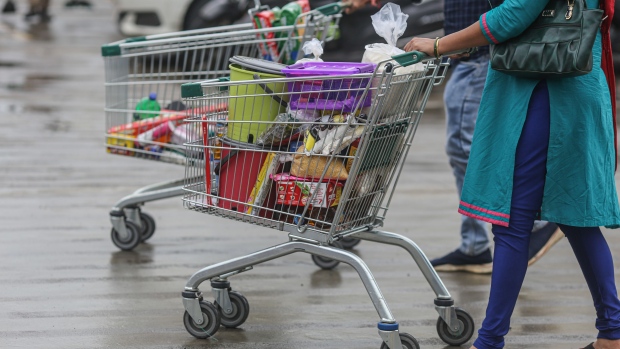 Shoppers push shopping carts in the parking lot at a DMart store operated by Avenue Supermarts Ltd., in Mumbai, India, on Tuesday, Aug. 16, 2022. The company opened its highest-ever 50 stores in the year through March, its most ever, and wants to tap Indias teeming middle-class, which according to some researchers could account for as much as half of countrys almost 1.4 billion population. Photographer: Dhiraj Singh/Bloomberg , Bloomberg

(Bloomberg) -- India’s interest-rate setters have mainly blamed global factors for failing to meet their inflation target, according to people with knowledge of a letter the monetary policy panel was obliged to write to the government.

The war in Ukraine and resultant spurts in energy and food costs, and supply disruptions caused by the pandemic are among main reasons cited, the people said, asking to stay unidentified as the correspondence is private. The detailed narrative doesn’t dwell much on the path forward, only stating that the worst of inflationary pressures are probably behind us, the people added.

Little is known about the contents of the letter sent earlier this month, after India’s consumer inflation topped the upper range of the 2%-6% band for three straight quarters. While the panel led by Reserve Bank of India Governor Shaktikanta Das was mandated by law to explain its failure in capping prices, the government isn’t required to make the information public.

The outlook is in line with what Das has said publicly about inflation having peaked. Economists surveyed by Bloomberg forecast the benchmark repo rate topping at 6.4% from 5.9% currently, and inflation is seen easing to about 5% in a year’s time from 6.8% now.

A Finance Ministry spokesperson declined to comment. An email to the RBI for comment was not immediately answered.

--With assistance from Anup Roy.