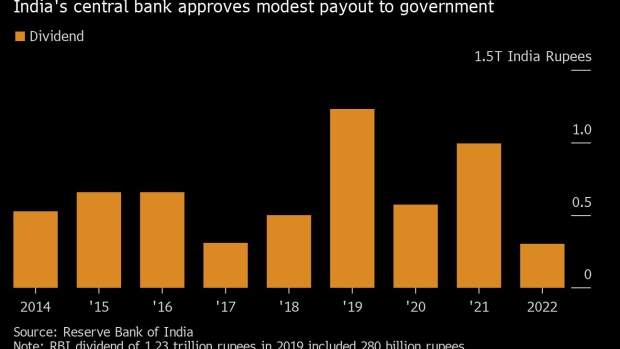 (Bloomberg) -- The Reserve Bank of India’s expenditure surged as it tucked away more money towards a contingency fund, it’s annual report showed, a development economists said cut the central bank’s surplus and led to the smallest dividend payout in a decade to the government.

While income rose by 20.1% in the financial year to March 2022, expenditure zoomed by more than 280%, according to the report published Friday, with provisions worth 1.15 trillion rupees ($14.8 billion) set aside and transferred to contingency fund. That was nearly six times the amount set aside last year, the annual report showed.

The contingency fund is a rainy day fund meant for unexpected and unforeseen situations, including depreciation in the value of securities, risks arising out of monetary and exchange rate policy operations conducted by the Reserve Bank of India.

During the year, revaluation of the central bank’s foreign currency investments lead to a charge of 942 billion rupees, leading it to shore up its contingency fund, the annual report showed.

The central bank approved the transfer of 303.1 billion rupees to the government from its surplus funds, a third of the 991.2 billion rupees it had given last year. The low payout may further strain the government’s fiscal position that is already under pressure from fuel tax cuts.

The lower dividend payment was driven by higher provisioning to ensure adherence to the economic capital framework, said Anubhuti Sahay, chief economist for India at Standard Chartered Plc. Otherwise, the sell off in bonds globally and in India would have led to lower capital buffers, she said. The central bank has to maintain a contingency risk buffer of 5.5%, the minimum required.

The size of RBI’s balance sheet increased by 8.5% as on March 31, 2022, mainly reflecting its liquidity and foreign exchange operations during the year, the report said.