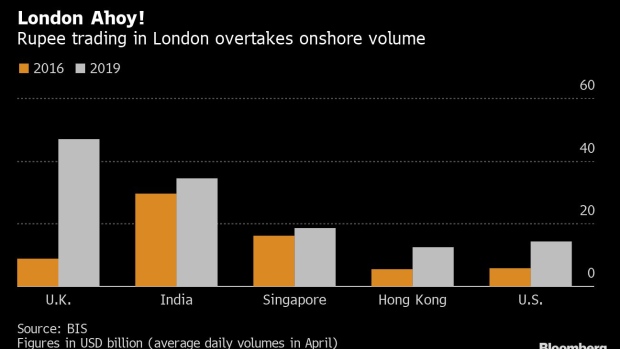 Indian two thousand and five hundred rupee banknotes are arranged for a photograph in Mumbai, India, on Sunday, Jan. 29, 2017. Reviving India's growth and boosting demand are essential as gross domestic product is likely to grow 7.1 percent in the year through March, the slowest pace in three years -- and this is before considering the impact of currency shortages in an economy where 98 percent of consumer payments are made in cash. Photographer: Dhiraj Singh/Bloomberg , Bloomberg

(Bloomberg) -- As London does more rupee trading than Mumbai, authorities in India are taking steps to get foreigners to transact onshore. Analysts say that will be no easy task.

India’s authorities are concerned a surge in rupee trading overseas threatens the stability of the currency, especially in times of stress. That worry has intensified after London overtook Mumbai as the top trading center. In response, India has been moving to make its onshore market more attractive and preparing to replicate offshore centers in specially designated financial zones within the country.

“Institutions have access to a Michelin 3-star menu” of currencies from “all over the world, all in one center,” in hubs like Singapore and London, he said. “Banks would have no incentive, from a purely cost basis alone, to set up a separate operation onshore.”

At issue is the rise of derivatives known as non-deliverable forwards -- bets on the direction of a currency made in offshore centers, beyond the rules of domestic authorities and without the need to deliver the currency itself. The contracts, which allow investors to hedge, arbitrage and speculate in non-convertible currencies such as the rupee, can be traced back to the 1990s but have surged in popularity in recent years.

London has become the biggest center for trading the Indian currency, according to the latest survey by the Bank for International Settlements in September. Average daily volumes for the rupee in the U.K. soared to $46.8 billion in April, exceeding the $34.5 billion recorded in India. Volumes have also substantially jumped in other centers like Singapore, New York and Dubai.

“It will be a better world for us if there is no NDF market, but we cannot wish it away,” former Reserve Bank of India chief Duvvuri Subbarao famously said during the U.S. taper tantrum of 2013 when the Indian currency was plummeting to record lows on an almost daily basis, with NDFs blamed for a surge in speculative trading.

In a report in July, an RBI task force on offshore rupee markets recommended getting trading back to the onshore market by extending trading hours and allowing local banks to offer price quotes to foreigners round the clock. It also said non-deliverable forwards trading should be permitted in special centers within India that would replicate the attractiveness of offshore locations.

In October, the RBI said it would allow rupee trading by customers outside the jurisdiction of the domestic economy in low-tax venues. The International Financial Services Centre in the Gujarat International Finance Tec-City, or GIFT City, an effort by Prime Minister Narendra Modi to replicate the market in Singapore, is awaiting regulatory approvals before becoming the country’s first venue to offer NDF rupee contracts.

In the existing onshore over-the-counter market, foreigners are allowed to hedge only on the basis of their underlying exposure. They can only enter into plain vanilla forwards and option contracts and are generally not allowed to rebook a contract once canceled.

BSE Ltd.’s subsidiary India International Exchange (IFSC) Ltd., which will probably spearhead the launch of the rupee derivatives, says the new venue will be cost-competitive. But that alone won’t be enough to attract trading, according to investors.

“India is not a major FX trading hub and so it’s inefficient from a firm’s point of view as there are more counterparties to generally trade FX than onshore in India,” he said. “Adding further counterparties adds to the cost and expense of setup and trading.”

India’s notorious flip-flops on rules remain a concern, according to Renuka Ramnath, founder and chief executive officer of Multiples Alternate Asset Management Pvt., a private equity company with close to $1 billion under management.

Investors have been “a bit disappointed with frequently changing regulations, which keep them perpetually nervous about whether the assumptions they made before coming to India are indeed going to hold,” she said at an event at the GIFT City in August discussing ways to bring rupee trading onshore.

To be sure, India has made some progress in addressing those concerns. The government is establishing a unified regulator for the IFSCs, which will eliminate the need for dealing with each regulator separately. And to boost existing onshore trading, the Securities & Exchange Board of India has tried to ease some know-your-customer requirements.

Still, much more must be done, according to Sanjay Guglani, chief executive officer at Silverdale Capital Pte Ltd., a Singapore-based fund manager who manages about $1 billion of assets.

Authorities can offer round-the-clock trading and a clearing-house facility to avoid counterparty risk, he said. They should also provide connectivity with other exchanges such as Singapore, London and the Chicago Mercantile Exchange to attract volume and ensure better price discovery, he said.

While time will tell how successful India’s efforts will be, investors are broadly skeptical. And for Oanda’s Halley, even the basic premise of trying to turn back the clock on offshore rupee trading is misguided in today’s interconnected markets.

“NDFs are merely part of an overall financial ecosystem of products, and the RBI’s white paper completely misses the point from the start by not recognizing this,” he said.

--With assistance from Nupur Acharya.