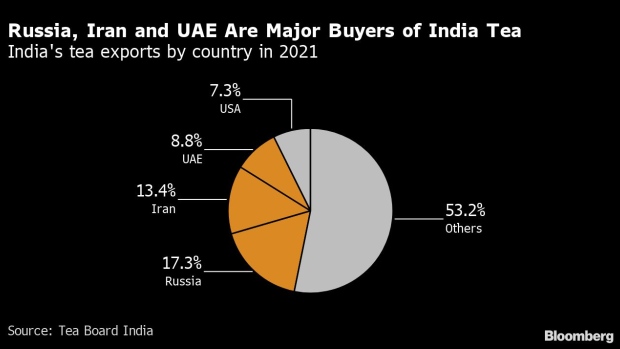 An Indian 500 rupee, bottom, and a 2,000 rupee banknotes are arranged for a photograph in Bangkok, Thailand, on Wednesday, Sept. 12, 2018. India's rupee dropped to a record low before trimming last week's loss; the government unveiled measures to prop up the sagging currency, including steps to facilitate bond issuance by local companies and possible curbs on imports. Photographer: Brent Lewin/Bloomberg , Bloomberg

(Bloomberg) -- Indian tea exporters are getting interest from the United Arab Emirates and sanctions-hit Russia and Iran to pay in rupees, a nod toward the government’s plan to settle international trade in the local currency.

Buyers from those countries are keen to pay rupees for Indian shipments, said P.K. Bhattacharya, secretary general of the Tea Association of India, an industry group that mainly represents producers in northern regions. This follows the central bank’s push to internationalize the currency, he added.

“With Russia, it might see the light of the day sooner, but for other countries it might take more time,” Bhattacharya said.

The Reserve Bank of India in July announced a plan to allow overseas trade to be settled in rupees. The move will make it easier for Indian companies to trade with countries facing difficulties invoicing in the US dollar, such as Russia and Iran. It also aims to arrest the rupee’s plunge to an all-time low against the greenback and help reduce a trade deficit that has ballooned to a record.

A greater use of the rupee in tea trade is an encouraging sign, but it’s unlikely to boost the currency’s status in a major way. That’s because the rupee’s use will mainly be restricted to those countries with limited choice.

“Tea is a niche industry, so it helps really at the margin but does not move the needle much as far as the trade balance is concerned,” said Madhavi Arora, lead economist at Emkay Global Financial Services Ltd.

A study by Federal Reserve Bank of New York staff found that financial sanctions on Russia following its invasion of Ukraine could encourage de-dollarization by other countries anxious to avoid similar moves against them, but the dollar’s prime international status will remain unrivaled.

There are other benefits to using the rupee in trade. Such an arrangement will help India accelerate its trade with countries like Russia and Iran.

India’s tea exports could jump as much as 18% this year to about 230 million kilograms from 195.5 million kilograms in 2021, said Sujit Patra, secretary of the Indian Tea Association, which represents 60% of the nation’s production.

Bhansali and Company, an Indian tea exporter, has received inquiries about rupee payment from Russia, Iran and the UAE, said Director Anish Bhansali.

The new rupee mechanism will help facilitate trade with Iran as funds under a separate rupee-rial arrangement have dwindled, said Azam Monem, director of Mcleod Russel India Ltd., one of the country’s biggest tea producers. He added that Bangladesh and the UAE are good candidates for the new program.