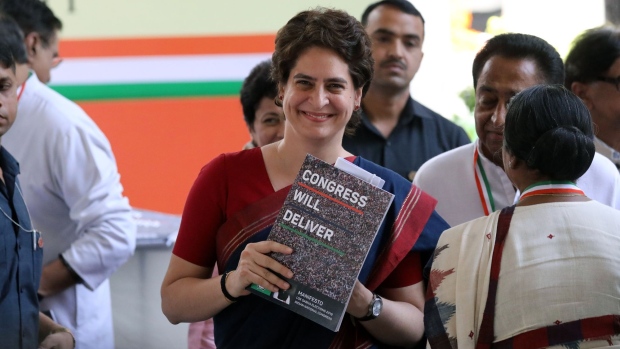 Priyanka Gandhi Vadra, general secretary of the Congress party, holds up a copy of the Congress manifesto at an event marking the document's launch at the party's headquarters in New Delhi, India, on Tuesday, April 2, 2019. India’s main opposition Congress party has pledged to tackle unemployment and poverty as it seeks to wrest power from Prime Minister Narendra Modi’s ruling coalition just days out from a national election. , Bloomberg

(Bloomberg) -- An actress jailed for protesting Prime Minister Narendra Modi’s controversial citizenship law, the mother of a rape survivor, and a beauty pageant winner. These are the women leading India’s once-dominant Congress party as it seeks to reinvent itself in a hotly contested state election.

The slew of female candidates in India’s most populous state of Uttar Pradesh is part of a new campaign led by Priyanka Gandhi Vadra, a scion of India’s once-powerful Nehru-Gandhi dynasty. With a catchy slogan “I’m a girl and I can fight” in Hindi, the campaign underscores the growing importance of women voters in the world’s largest democracy.

Vadra has pledged 40% of Congress party’s candidates for the 403-seat state assembly will be women. She has met that promise in the first list of candidates her party announced for the state polls that will be carried out in seven phases starting from Feb. 10. The election results will be released March 10.

“If you have suffered in the past, you have to fight and grab power to fight for your rights,” Vadra said in a video posted on Twitter last week. Congress party’s list of candidates is a new kind of politics, she added.

While political parties have courted female voters, it hasn’t translated to greater numbers of women lawmakers. India was ranked 147th of 193 nations last year on the percentage of women in its powerful lower house, according to data released by Inter-Parliamentary Union.

During the 2017 polls in Uttar Pradesh, when the BJP’s Hindu hard line leader Yogi Adityanath swept his party to victory, less than a tenth of the candidates fielded across party lines were women. They saw little success with only 39 clinching seats then, according to a tracker by Ashoka University.

With about half as many people as the European Union, Uttar Pradesh is seen as a major indicator of national mood ahead of the next general election in 2024. Congress party won just seven seats in the last state polls as it has struggled to gain traction since the BJP come to power in 2014.

The women fielded by Congress party are diverse. Sadaf Jafar, the actress who was jailed for her role in demonstrations against a religion-based citizenship law is now a Congress spokeswoman. Another candidate Poonam Pandey, led a protest for wages by women frontline workers who are helping India to achieve its vaccination targets.

The rape survivor’s mother has promised to work for the poor in her district if she is elected. Her daughter’s rapist, a former powerful legislator, has been found guilty for sexual assault as well as murder and was sentenced to life in prison.

For Vadra, who in 2019 formally joined the Congress party that her family has controlled for most part since India’s independence in 1947, the gambit is crucial. Her party has seen its star decline in Uttar Pradesh over the last two decades.

It remains to be seen if the BJP and its rival for power in the state, the Samajwadi Party, see this as a serious challenge. So far the BJP fielded 10 women out of a 107 candidates while Samajwadi Party is putting forward one female candidate from its alliance with a regional party.

“When one party promises, other parties try to match it,” said Sudha Pai, a professor at the Centre for Political Studies at Jawaharlal Nehru University in New Delhi. While fielding more women might help Congress party gain some seats, India’s tilt toward Hindu nationalism and protests by the farmers who forced Modi to reverse new agriculture laws may overshadow the effort, she added.

“It doesn’t take away the fact that the Congress party hardly has an organizational structure and workers on the ground,” she said. “So how far it will help in reviving the party is very questionable.”