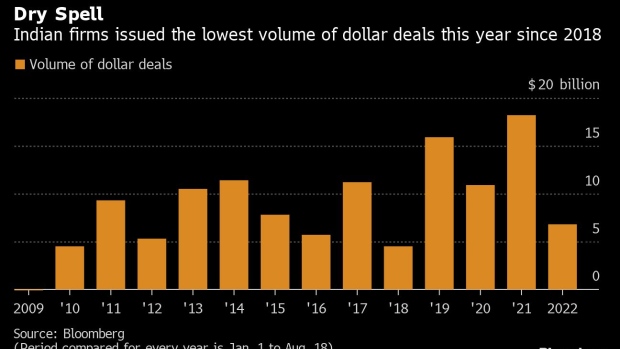 A pedestrian walks past a currency exchange store in Mumbai, India, on Thursday, June 28, 2018. The rupee, the worst performing currency in Asia this year, touched a record low at 69.0925 per dollar on Thursday as gains in oil prices threatened to stoke inflation and worsen the nations domestic and external finances. Photographer: Dhiraj Singh/Bloomberg , Bloomberg

(Bloomberg) -- The lull in the Asian primary credit market extended for another week, with issuance dropping to its lowest since May.

No deals in excess of $100 million concluded in the week ending Aug. 19, after just $453 million the week before, according to data compiled by Bloomberg.

Debt sales have suffered globally this year in the face of red-hot inflation and aggressive policy tightening by central banks, despite a spate of US companies storming the market this week. In Asia, depreciating currencies have raised the cost of servicing offshore debt, prompting companies such as JSW Steel Ltd. to consider the local-currency market instead.

India is a prime example of the dry spell in Asia. Just $6.83 billion has been raised this year and there hasn’t been a US-currency note sold by an Indian company since April, according to Bloomberg-compiled data. That’s the longest period without a deal since 2009.

Several companies in the country have pulled deals this year, in part because India faces the additional challenge of record government issuance competing for investors’ funds and the currency plummeting to a record low against the dollar.

“The fall in dollar issuances this year could be due to a sharp rise in dollar interest rates thus reducing the arbitrage with borrowing in India,” said Arvind Chari, the chief investment officer at Quantum Advisors Pvt. “The sharp depreciation in the rupee may also have postponed some fund raising plans.”

(Updates with Asia numbers, writes through)