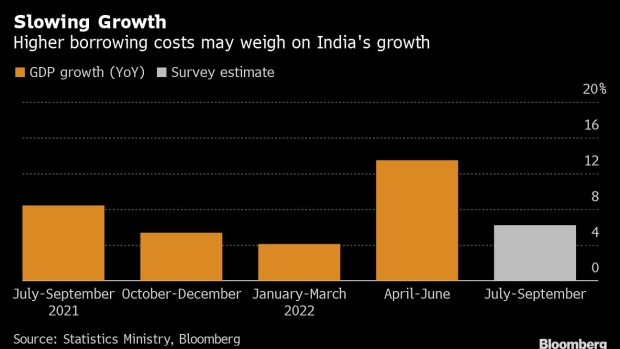 The main market area at dusk in Gandhidham, India, on Thursday, Sept. 8, 2022. India is scheduled to announce its CPI figures on Sept. 12. Photographer: Prashanth Vishwanathan/Bloomberg , Bloomberg

Gross domestic product is estimated to have risen 6.2% in the three months to September from a year ago, according to a Bloomberg survey of economists, cooling from a 13.51% growth reported in the previous quarter. Still, an expansion at the 6% level is faster than most of the quarterly outcome since 2019, according to compiled data.

The latest print, which captures part of the three-month long festive season counted on to boost consumption, will provide an indication of how resilient demand is in the face of elevated price gains and higher borrowing costs. The Statistics Ministry is due to release the data at 5:30 p.m. local time Wednesday.

The Reserve Bank of India, which has raised its benchmark rate by 190 basis point this year and brought it back to pre-pandemic levels, is expected to stay hawkish at the monetary policy review next week as inflation stayed above the 2%-6% target since the start of 2022.

“There are signs that higher interest rates are feeding through to the real economy,” said Shilan Shah of Capital Economics Asia Pte Ltd. Falling passenger vehicle sales and slower growth in personal loans suggest consumers are cutting down on spending, and this trend will continue in the coming quarters, he said.

Tighter financial conditions globally are stoking recession fears and are hurting the nation’s external finances. India’s merchandise exports, that surged by almost 200% in April 2021, have now fizzled, posting an almost 17% contraction in October.

“Both domestic and external demand are expected to face headwinds due to global monetary tightening,” said Dhiraj Nim of ANZ Banking Group who expects growth to slow further.

Slower Growth Will Be Good for India, For Now, Economists Say

While many economists foresee a slowing momentum in a nation known for its world-beating growth, Soumya Kanti Ghosh from the State Bank of India is withholding judgment. “It may be better to look through the GDP headline numbers for a couple of quarters before arriving at a definitive conclusion about the growth trajectory.”