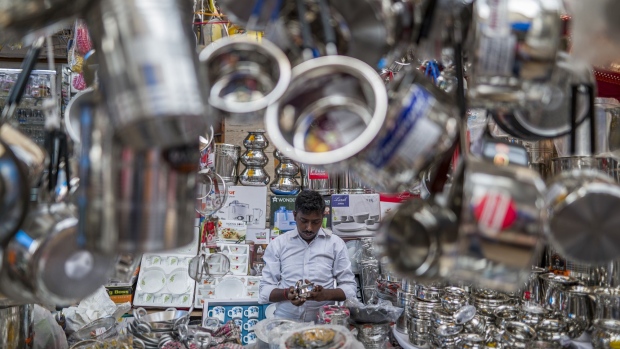 A vendor packs a stainless steel utensil at a marketplace ahead of the festival of Diwali in Noida, on the outskirts of New Delhi, on Saturday, Oct. 22, 2022. Indian shoppers are back in force online and in stores, splurging this festive season after the coronavirus pandemic damped celebrations and consumption in previous years. , Bloomberg

Gross domestic product grew 6.3% in the July to September period compared to a year ago, according to data released by India’s statistics ministry on Wednesday. That’s a drop from the 13.5% growth in the preceding quarter and compares with a median forecast of 6.2% in a Bloomberg survey.

India’s growth has suffered from persistently high inflation and tighter central bank policies in other parts of the world. The Reserve Bank of India, which has raised its benchmark rate by 190 basis point this year, is expected to remain hawkish at a monetary policy review next week. Rate setters have tried for months to lower inflation within a 2% to 6% target range.

Investment between July and September increased 10.4% from a year ago and private consumption was up 9.7%, the data showed. Government spending fell 4.4%. Growth in gross value added -- which strips out tax and subsidy transfer payments -- rose 5.6%, slowing from 12.7% in the previous quarter and 8.3% a year earlier.

At a briefing in New Delhi, Chief Economic Adviser V Anantha Nageswaran said he was confident India was on the right path, despite challenges in the broader global landscape.

“Most components of economic growth are stabilizing at a moderate pace and we are on track to deliver a 6.8%-7% GDP growth in the current financial year,” he said.

--With assistance from Adrija Chatterjee.

(Updates with information throughout)