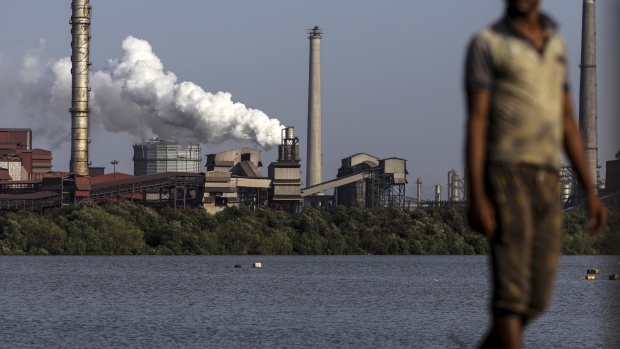 A laborer walks near the JSW Steel Ltd. manufacturing facility in Dolvi, Maharashtra, India, on Thursday, May 18, 2017. JSW, India's biggest producer, reported a jump in fourth-quarter profit, boosted by record output, and said it approved plans to raise about $2.5 billion in debt. Photographer: Dhiraj Singh/Bloomberg , Bloomberg

The rupee loan market is looking “attractive” for India’s largest steel company by market value, said Seshagiri Rao, joint managing director and group chief financial officer. The firm’s proportion of rupee debt will grow to half its 700 billion rupees ($8.6 billion) of borrowings over the next year, from about 45% at the end of December, he said.

JSW Steel’s plans underline a trend for Asian companies to favor local issuance due to unfavorable exchange rates and a rapid rise in US borrowing costs. Overseas debt sales in dollars, euros and yen by entities in Asia outside Japan plummeted more than 50% last year, Bloomberg-compiled data show.

“We relied upon the Indian markets last year because of difficult financial market conditions overseas and the interest arbitrage,” Rao said in an interview at his office in Mumbai, adding that the JSW Steel’s overall debt load would not change. “This is not going to change dramatically this year.”

The steel producer last issued US-currency bonds in 2021, and stayed away from the offshore market in 2022 in tandem with other Indian companies.

JSW Steel has embarked on a $6 billion capital expenditure plan to scale up capacity to 38 million tons on bullish expectations for Indian consumption.

Rao expects demand in the country to increase between 8% and 10% in the next fiscal year thanks to government spending on infrastructure projects and growth in the automotive, construction and capital goods sectors.

That would possibly be in excess of the World Steel Association’s projection for a 6.7% increase in demand in 2023.