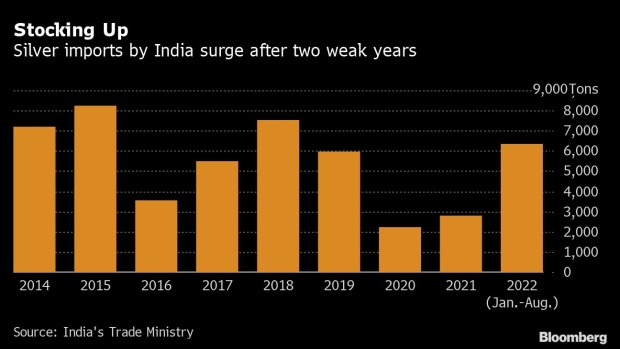 A worker inspects silver granules at the ABC Refinery smelter in Sydney, New South Wales, Australia, on Thursday, July 2, 2020. Western investors piling into gold in the pandemic are more than making up for a collapse in demand for physical metal from traditional retail buyers in China and India, helping push prices to an eight-year high. Photographer: David Gray/Bloomberg , Bloomberg

(Bloomberg) -- Indian silver consumption is forecast to surge by around 80% to a record this year, as traders draw down inventories in warehouses from London to Hong Kong after two Covid-riddled years.

Indians bought historically low amounts of silver in 2020 and 2021 as supply chains and demand were hit by virus outbreaks. While consumers rushed to jewelry stores to buy gold in last year’s final quarter when pandemic restrictions eased, pushing sales to an all-time high, silver demand grew by less than 25%.

This year, silver sales are back on track. Local purchases may surpass 8,000 tons in 2022 from about 4,500 tons last year, said Chirag Sheth, principal consultant at Metals Focus Ltd. That’s up from an April estimate of 5,900 tons.

“We are seeing a jump in purchases among retail customers, similar to what we saw in gold last year, because of pent-up demand,” Sheth said.

Imports during the January to August period were 6,370 tons compared to just 153.4 tons during the year-before period, according to the latest data from the nation’s trade ministry. For 2021, the country shipped in only 2,803.4 tons.

India imports about half of its silver from the UK, mainland China and Hong Kong. Buying is mainly from London Bullion Market Association-accredited warehouses, with inventories in those vaults now falling, according to Sheth.

“While gold is brought into the country by air, silver is mostly by sea,” Sheth said. “But now because of the huge demand, everything is coming by air.” Wait times for sourcing the metal have also gone up, with suppliers taking about 20 days to dispatch an order, he said.

Silver holdings in London vaults fell to 27,101 tons at the end of September, the lowest since records began in 2016, according to the LBMA. Prices in India have fallen about 6% this year, while gold has risen around 5%. Futures of the white metal on local exchanges are trading at 58,869 rupees per kilogram, still well below the record of 77,949 rupees touched in 2020.

Jewelry demand comprises more than a third of total consumption in India, while nearly a quarter goes to the industrial sector and the rest is used in silverware and other applications. The metal is popular in rural areas where it’s viewed as “poor man’s gold,” because it’s many times cheaper than its fellow precious metal.

“Silver was relatively cheaply priced compared to gold, so that is probably one of the reasons why investors were buying” the metal, including in the US and Europe, Perth Mint Treasurer Sawan Tanna said. “In terms of institutional silver demand, we saw that in India there was huge demand in the form of silver large bars, purely because the spot price of silver was relatively low historically.”

Demand for silver in India may be strong for the next three to four months before stabilizing, Sheth said. Consumption in 2023 will not be as robust as this year, he said.