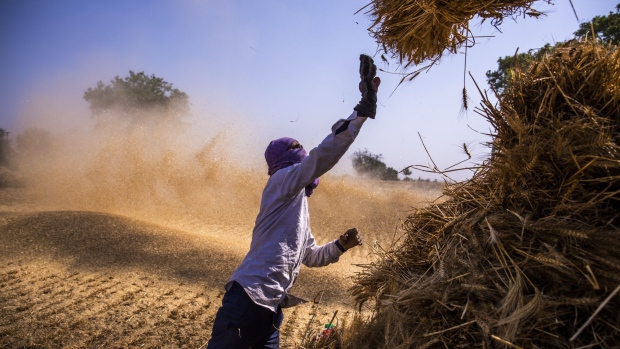 A farmers throws a bundles of cut wheat as a thresher operates at a field in the Bulandshahr district of Uttar Pradesh, India, on Tuesday, April 21, 2020. The farm sector is likely to be the lone bright spot for India's stalled economy as Prime Minister Narendra Modi crafts a plan to exit the world’s biggest lockdown and revive stalled economic activity. Photographer: Prashanth Vishwanathan/Bloomberg , Bloomberg

(Bloomberg) -- India extended a scheme for distribution of free food grains to the country’s poorest until the end of November to help them cope with the economic pain of the country’s long drawn virus lockdown, Prime Minister Narendra Modi said.

Some 800 million of India’s poorest were provided free foodgrains for their families since April and this will continue for another five months, Modi said in a televised address to the nation Tuesday. The entire program would cost an estimated 1.5 trillion rupees ($20 billion).

“The biggest beneficiary of this program will be those poor who leave their villages and go to other places for livelihood,” Modi said. “During the lockdown the country’s top priority was that no poor should go without food in any situation.”

His speech comes as India’s virus infections continue to surge and a downturn in business and investment activities deepens.

India is now the world’s fourth most-affected country, with Covid-19 cases jumping by nearly 20% over the last week, according to data collected by Johns Hopkins University and Bloomberg News. The rise in infections is only behind South Africa where new infections rose by 22% over the last week.

Even as the country struggles to contain the pandemic, Modi’s administration has been gradually relaxing lockdown rules to boost economic activities. The government eased the timing of a night time curfew on Monday but educational institutions will remain closed until July 31.

The relaxations are unlikely to prevent a contraction in Asia’s third-largest economy, with the International Monetary Fund forecasting a 4.5% fall in gross domestic product this year. Consumers -- the biggest driver of growth -- have withheld spending amid uncertainty about jobs, while 21 trillion-rupees ($278 billion) of measures announced by Modi’s government aren’t expected to lend immediate support.

In his address Modi urged Indians to remain cautious in the face of the pandemic even as the economy reopened.

“A timely lockdown and other decisions have saved hundreds of thousands of lives in India,” he said, adding that since the lockdown rules were eased there are “people who are not following the rules, we need to stop and counsel them.”