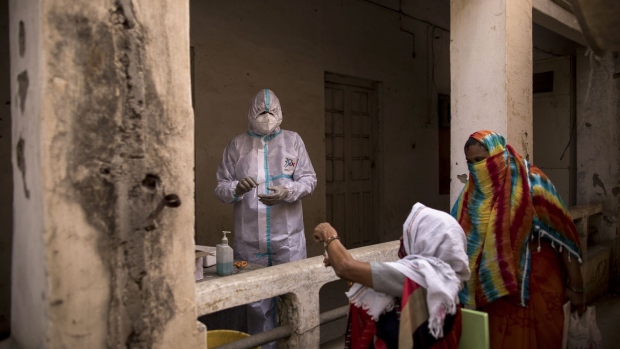 A health worker wearing prepares swab to be taken at a Covid-19 testing site set up in the employment exchange office in Agra, Uttar Pradesh, India, on Monday, May 3, 2021. India's fierce second wave has overwhelmed the nation's underfunded health system, with infections topping 400,000 cases in a day and hospitals running out of beds, oxygen and medical supplies. , Bloomberg

(Bloomberg) -- The number of new coronavirus infections in India has peaked, according to a new tracker developed by researchers at Cambridge Judge Business School and the National Institute of Economic and Social Research.

“But there is substantial variation among states and union territories in their trajectories, with cases continuing to increase over the next two weeks in areas such as Assam, Himachal Pradesh, Tamil Nadu and Tripura,” the researchers wrote.

The projections are in line with those from some other experts, including Prime Minister Narendra Modi’s advisers.

Health services remain overwhelmed and several hospitals face shortage in oxygen supplies. The nation has reported more than 300,000 new infections for more than 20 straight days and the official tally of daily deaths has topped 4,000. The numbers are probably vastly undercounted, experts say.