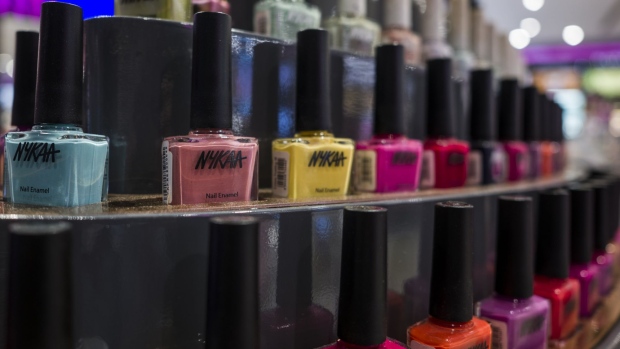 (Bloomberg) -- Nykaa, an Indian e-commerce startup for beauty products, filed preliminary documents for an initial public offering in another sign of the booming interest in the country’s technology industry.

FSN E-Commerce Ventures Ltd., the formal entity that operates Nykaa, said it would raise as much as 5.25 billion rupees ($70.6 million) by selling new equity in the offering, according to a copy of its draft red herring prospectus. In addition, existing shareholders will sell as many as 43.1 million shares.

Nykaa, founded in 2012 by former investment banker Falguni Nayar, is seeking a valuation of more than $4 billion and plans to sell in total just more than 10% of the equity, Bloomberg News has reported. The details of the offering will only be finalized after the company and its bankers meet with investors in the weeks ahead.

India’s technology industry has surged this year, with investors showing increasing interest in the country’s startups. The food-delivery app Zomato Ltd. became the nation’s first unicorn to make its stock-market debut in July and has soared more than 80% since the IPO.

The online insurance platform Policybazaar, backed by Japan’s SoftBank Group Corp., just filed for an IPO that could raise as much as 60.18 billion rupees, with a more than a dozen technology startups aiming for IPOs through next year.

Nykaa has grown into India’s top destination for beauty products with its own chain of physical outlets and 24.5 billion rupees ($330 million) in revenue and other income in the fiscal year ended in March. The company was last valued at $1.2 billion, according to CB Insights.

Bloomberg News first reported the company’s IPO plans and that the company is working with Kotak Mahindra Capital Co. and Morgan Stanley on a potential offering.