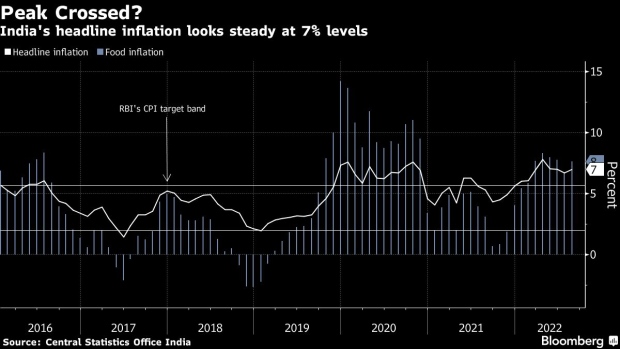 A cyclist transports empty water bottles near the Reserve Bank of India (RBI) headquarters, left, in Mumbai, India, on Saturday, Feb. 5, 2022. The RBI is set to outline its policy on Feb. 9 and is expected to take further steps like raising the reverse repo rate to further pull back on pandemic-era steps. Photographer: Dhiraj Singh/Bloomberg , Bloomberg

(Bloomberg) -- India’s central bank delivered a hat-trick of half-point interest-rate hikes, sustaining its battle to rein in inflation while flagging “calibrated action” to shield the economy amid fears of a global recession.

The benchmark repurchase rate was raised by 50 basis points to 5.90%, Reserve Bank of India Governor Shaktikanta Das said after the six-member monetary policy committee’s 5-1 decision. The move was expected by 34 of 46 economists in a Bloomberg survey.

“If high inflation is allowed to linger, it invariably triggers second order effects,” Das said in a virtual briefing, taking the total increase this year to 1.9 percentage point. He declined to provide forward guidance but pledged to “remain alert and nimble” and data-dependent amid a global storm arising from aggressive tightening by advanced economies.

In remarks seen less hawkish compared to the August meeting when he vowed to do “whatever it takes” against inflation, the governor’s more balanced rhetoric at a time of a volatile currency markets signal that the RBI, like many of its peers in the region, intends to safeguard the economy while trying to curb prices. Das also touted India’s robust reserves to help support the rupee.

The RBI cut its economic growth outlook for the financial year ending March to 7% from 7.2% previously, while keeping its 6.7% forecast on inflation. India’s consumer prices hovered at 7%, against the central bank’s 2%-6% target band.

“RBI appears to have delivered a status quo policy,” Rahul Bajoria, an economist with Barclays Bank Plc said, referring to the bank’s past decision that involved an identical move. “We think data dependency will rise going forward, as RBI stares at a wider trade off between growth and inflation.”

The benchmark 10-year yield was up only one basis point at 7.35% after rising by as much as seven basis points, while the rupee rose 0.3% to 81.5875 per dollar. The benchmark Sensex stock index is headed for its biggest single-day rally in a month.

Bonds pared early losses because “the governor’s commentary was not very hawkish and took a balanced view on inflation,” said Naveen Singh, head of trading at ICICI Securities Primary Dealership.

Das said the inflation trajectory remains clouded with geopolitical uncertainty, but falling crude prices may offset pressures spreading from wheat to rice. The RBI now expects oil prices to average at $100 per barrel, from $105 seen earlier.

RBI will stay focused on withdrawal of accommodation, Das said. Citigroup Inc. had expected a change in stance to “neutral.”

The deterioration in India’s foreign exchange reserves is mainly due to a stronger dollar and the warchest remains robust, Das said, signaling he won’t hesitate to deploy it to cushion the rupee. He said 67% of the decline in the reserves is due to valuation impact.

“The RBI intervenes to curb exchange rate volatility,” Das said. “The adequacy of forex reserves is always kept in mind and the umbrella continues to remain strong.”