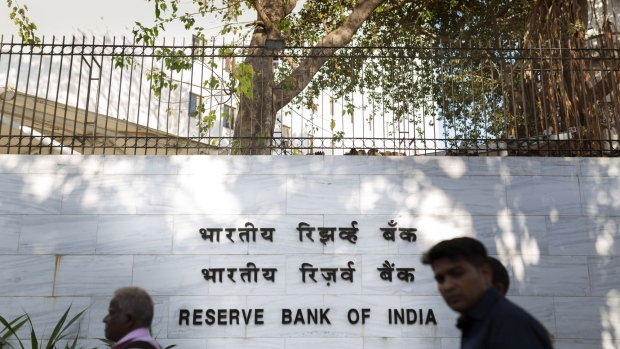 (Bloomberg) -- India’s monetary policy makers will likely raise interest rates two more times before they even consider taking a breather toward the end of the year.

That’s the takeaway of several economists from the minutes of the Monetary Policy Committee’s meeting earlier this month, when the panel hiked the key rate by a half-point to 4.90% to anchor inflationary expectations. The Reserve Bank of India’s rate panel is scheduled to meet thrice more this year.

June’s jumbo hike, which followed a 40 basis points increase in May, is prompting analysts from Nomura Holdings Inc. and Barclays Plc to pencil in a 35 basis-point move in August, while Emkay Global Financial Services Ltd. expects a quarter-point hike or more and Citigroup Inc. sees less than 40 basis points as a possibility.

“The question of a pause is unlikely to be widely raised in the next few policy meetings,” Nomura economists Sonal Varma and Aurodeep Nandi wrote in a report to clients. It “may come up more prominently in debate from the December policy meeting onwards,” they said.

Analysts, including HSBC Holdings Plc’s Pranjul Bhandari, noted a divergence of views among the panel’s six members about what the peak policy rate should be in the current cycle, making it anybody’s guess on where the rates terminate. She sees the repurchase rate ending at 6% by mid-2023.

In the meeting earlier this month, RBI Deputy Governor argued that the key rate should at least be above the four-quarters ahead forecast of inflation, which is at 5.8%. Ashima Goyal, a dovish policy maker, argued that the “one-year ahead real rate must not be more negative than -1%” -- a feat achieved by 50-60 basis points of hikes and implying rates nearly peaked in the June policy itself.

Jayanth Varma, another rate-setter, favored sharper rate hikes arguing that real rates remained close to where they were in April. His colleague in the panel Shashanka Bhide warned of inflation pressure running through the full fiscal year.

Beyond August, Barclays economists Rahul Bajoria and Virinchi Kadiyala expect the panel to deliver two 25 basis points hikes to take the main rate to 5.75% by December, with a stance change to neutral seen happening in October.

Emkay’s Madhavi Arora sees the rate climbing to around 5.65% in the current fiscal year, while noting that liquidity tightening too was a proxy to rate hike.