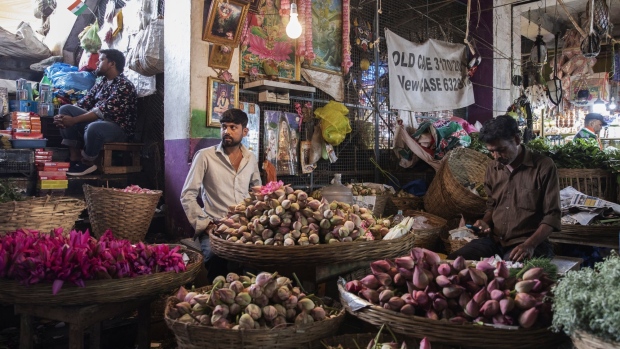 The vegetable and fruit market in Bengaluru, India, on Monday, Aug. 15, 2022. India’s wholesale price inflation due Aug. 16 would show price gains easing to 13.75% in July, from 15.18% the previous month, according to a separate survey as of last Friday. , Bloomberg

(Bloomberg) -- The Indian central bank is now solely focused on cooling prices in Asia’s third-largest economy as inflation stayed above its target this year.

“The conduct of monetary policy in India is now oriented completely to bringing down inflation from unconscionably high levels as its priority,” the Reserve Bank of India said in its August Bulletin released Thursday. The central bank is mandated to keep headline retail inflation within 2%-6%, while its medium-term target is to anchor the expansion at 4%.

India’s central bank has raised interest rates by 140 basis points since May to curb runaway inflation, fueled by elevated food and global oil prices. The RBI said it expects inflation to fall from 7% to 5% in the April-June quarter next year.

This will be a “decisive point in its trajectory,” after which the task before the monetary policy committee would be to guide inflation to the medium term target of 4%. However, that 100 basis point decline “may prove to be more arduous” than the drop from 7% to 5%, the RBI said in its report.

Imported inflation pressure points “remain the overarching risk, followed by pending pass-through of input costs if producers regain pricing power, and wages,” the RBI said. “Yet, some risks have turned down - commodity prices, especially of crude; supply chain pressures; revving up of monsoon activity due to the depression in the Bay of Bengal.”

The RBI has also remained “unswerving and resolute” in its efforts to stabilize the foreign exchange market, “not by monetary policy but through interventions and liberalization of capital inflows,” the central bank said in its report.

The RBI has been deploying foreign-exchange reserves to protect the rupee that tested frequent lows. From its peak of $642 billion in September, the stockpile has fallen to $573 billion as of August 5. The present level of reserves, the RBI said, should be enough to cover 9.4 months of imports.