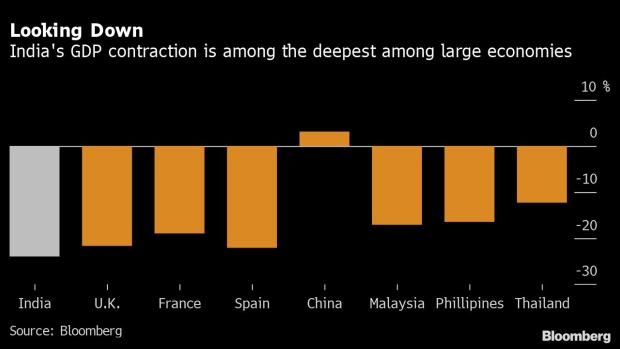 (Bloomberg) -- India’s government injected more uncertainty into the economy this week, failing to act in time to appoint members to the central bank’s panel that decides interest rates.

The Reserve Bank of India deferred its three-day interest-rate meeting due to start Tuesday, without giving any reasons or a new date for its policy decision. The six-person Monetary Policy Committee is currently without three external members after their terms expired last month. Rules require at least four MPC members to be present at a meeting.

The government failed to make use of the ample time it had to appoint new MPC members, sowing more confusion into financial markets. The RBI has been doing most of the heavy lifting in providing stimulus to the economy this year, given limited fiscal room available to Prime Minister Narendra Modi’s government.

“This is shambolic,” said A. Prasanna, chief economist at ICICI Securities Primary Dealership Ltd. in Mumbai. “The government and RBI had at least three months time to appoint members and yet they have failed. Monetary policy was the only lever providing support to the economy and such uncertainty doesn’t help.”

MoneyControl website reported the government has selected the new MPC members, but has delayed announcing them until it completes processes like background and security checks. The new MPC could meet as early as next week, the website said, citing a senior government official.

This week’s rate decision was due to be announced on Thursday, with most economists predicting the RBI would keep its benchmark interest rate unchanged at 4%. The RBI had cut rates by 115 basis points this year and pumped in billions of dollar of liquidity into the financial system to support the recovery.

One-month dollar-rupee non-deliverable forwards were little changed at 73.99 as of 6:54 a.m. in Mumbai.

The government’s delays are not just limited to MPC appointments, with authorities moving slowly to provide fiscal support. Finance Minister Nirmala Sitharaman in May unveiled a 21 trillion-rupee ($285 billion) economic package, equivalent to 10% of gross domestic product, but the actual fiscal cost worked out to just about 1% of GDP. That prompted many, including Governor Shaktikanta Das, to call for more stimulus, yet little has been forthcoming to date.

Anurag Thakur, the junior finance minister, said in June the government was still considering further support, and that while “announcements have been paused, action toward implementation continues.”

The economy posted a record 23.9% contraction in the June quarter from a year ago, the most among all major economies tracked by Bloomberg. Goldman Sachs Group Inc. is predicting the economy will shrink 14.8% in the fiscal year through March 2021.

The Modi administration is due to announce its financial year second-half borrowing this month, and is expected to further increase it from a record 12 trillion rupees.

In India, appointments to key positions by the government -- from heads of state-run banks to deputy governors at the RBI -- can be a lengthy process fraught with delays.

The central bank had earlier this year written to the government to extend the tenor of the three external members of the MPC -- Chetan Ghate, Ravindra Dholakia and Pami Dua -- in order to maintain continuity in policy during the pandemic. The government instead formed a panel to select new members, people with knowledge of the matter said in July.

“One hopes that the government recognizes the urgency of the matter,” said Rudra Sensarma, professor of economics at the Indian Institute of Management in Kozhikode. It’s “surprising that the government has not decided on the new appointees which is of utmost importance to preserve the credibility of the RBI’s decision making,” he said.