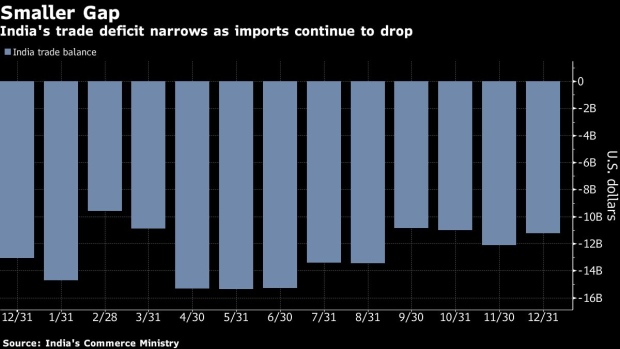 Gantry cranes move shipping containers at the Jawaharlal Nehru Port, operated by Jawaharlal Nehru Port Trust (JNPT), in Navi Mumbai, Maharashtra, India, on Saturday, Dec. 16, 2017. Many of the cargo containers passing through India's busiest port in Mumbai have a small piece of Japan Inc. attached: Devices from NEC Corp. that can be tracked as the containers rumble through the interior of Asia's third-largest economy. Photographer: Dhiraj Singh/Bloomberg , Bloomberg

The gap between exports and imports was at $11.25 billion in December, compared with $12.1 billion in November, data released Wednesday by the Commerce Ministry show. That was narrower than the median estimate of $11.6 billion in a Bloomberg survey of 22 economists.

(Updates with gold import data under Get More section. An earlier version of this story was corrected to say gap narrowed.)

To contact the editors responsible for this story: Nasreen Seria at nseria@bloomberg.net, Subramaniam Sharma, Karthikeyan Sundaram