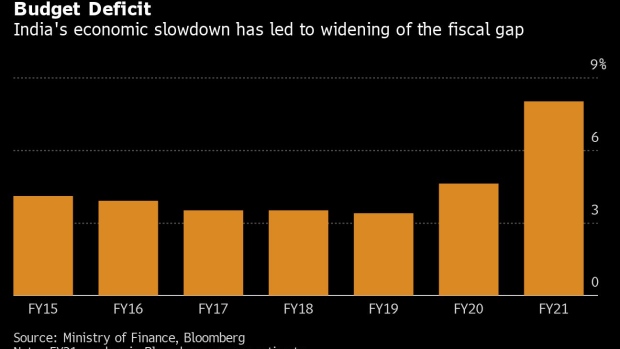 (Bloomberg) -- India is set to swing from being a cautious spender in 2020 to opening the fiscal floodgates as Prime Minister Narendra Modi seeks to pull Asia’s third-biggest economy bank from the worst of the pandemic.

Curbs imposed by the finance ministry on more than 80 government departments and ministries earlier in the year to preserve cash were relaxed this quarter. In addition, this year’s budget will be increased from its current 30 trillion rupees ($407 billion) when new spending plans are announced Feb. 1, according to people familiar with discussions, who asked not to be identified as the information isn’t public and subject to change.

The developments will give a boost to much-needed spending to help weather the hit from the coronavirus pandemic. Government expenditures have barely hit the half way mark seven months into the fiscal year, which started April.

Government spending is key to staving off a prolonged crisis in the nation that’s home to the world’s second-largest coronavirus outbreak. The economy entered an unprecedented recession last quarter after lockdowns brought economic activity to a near standstill in the April-June period.

In addition to budget spending, Modi’s government has announced measures that it said are worth an additional 30 trillion rupees, or 15% of gross domestic product, to rescue businesses and jobs.

That package, however, underwhelmed some economists who saw the actual fiscal cost of the steps, which were mostly loan guarantees, at less than 2% of gross domestic product. This compares to direct spending of roughly 3% of GDP on average in other emerging markets, according to S&P Global Ratings. On top of that, absence of private investment added to urgency for the government to ramp up spending, which was just 55% of the budgeted amount as of October.

The threat of a credit rating downgrade to junk discouraged officials from delivering a more immediate boost to the economy through direct cash handouts to citizens or tax cuts. India’s net government debt will rise to more than 90% of GDP this year from a little over 70% last year, according to S&P Global Ratings, and its combined fiscal deficit will be in double digits this year -- factors that have put the nation on the path for a rating cut.

Finance Minister Nirmala Sitharaman said in an interview this month that she wouldn’t let worries about a fiscal deficit stop her from spending more.

“There is a need, and a clear need, for me to spend the money,” Sitharaman said.

The finance ministry declined to comment this week on the possibility of up-sizing the current budget.

The federal government’s budget gap will probably widen to 8% of GDP this year, according to a Bloomberg survey, as revenue collections are hurt by the economic contraction and the need for additional stimulus steps boost borrowing. That will be more than double the targeted 3.5%.

The government expanded its market borrowing plan this year to an unprecedented 13.1 trillion rupees from its planned 7.8 trillion rupees. The increase is needed to compensate states for the shortfall in the collection of goods and services tax.

High-frequency indicators show that a recovery is taking hold, with the central bank seeing the nation exiting a recession in the current quarter. The Reserve Bank of India also this month revised its full-year growth outlook to a milder 7.5% contraction, compared with its October estimate for a 9.5% decline.

“More evidence has been turned in to show that the Indian economy is pulling out of Covid-19’s deep abyss and is reflating at a pace that beats most predictions,” the RBI said in its December bulletin, after pledging to keep borrowing costs lower for the near future. “Although headwinds blow, steadfast efforts by all stakeholders could put India on a faster growth trajectory.”