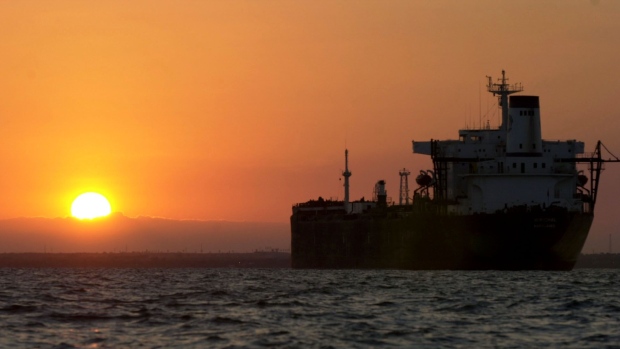 An oil tanker is silhouetted as the sun rises over Lake Maracaibo, Venezuela, on Friday, December 13, 2002. Tanker owners are heading for the second-best year since the 1973 Arab oil embargo, with rising crude-oil demand during the coldest months in the U.S. and Europe set to fuel fourth-quarter profits. Photographer Diego Giudice/Bloomberg News Photographer: DIEGO GIUDICE , BLOOMBERG NEWS

(Bloomberg) -- The US expressed concern that an Indian company hid the origin of Russian oil, processed it and shipped some products to New York, according to a deputy governor of India’s central bank.

India was notified of the case by the US Treasury, Michael Patra, deputy governor in charge of monetary policy at the Reserve Bank of India, said at an event Saturday in Bhubaneswar, the capital of the eastern state of Odisha.

“I will give an example of how topsy-turvy the world has become,” Patra said. “You know there are sanctions against people buying Russian oil. And this was reported to us by the US Treasury.” He didn’t elaborate on whether any action was being taken over the shipment.

An Indian ship met a Russian tanker at sea, picked up oil, and sailed to a port in India’s Gujarat state where the cargo was processed into a product used in the making of single-use plastic, Patra said. “The refined output was put back on that ship and it set sail without a destination. In the mid-sea it received a destination so it recharted its course, going to New York.”

India and China have become willing consumers of Russian crude as most other buyers shunned its barrels following the invasion of Ukraine. The South Asian nation imports 85% of its oil needs, and cheap supplies provide some economic relief as the country faces elevated inflation and a record trade gap.

India has defended the Russian purchases, citing its national interest to source less expensive crude. The imports have delivered some of a trove of cash that Russia has garnered from commodity markets, helping to fund its war. Russia’s muscling into the Indian and Chinese markets has eaten into the share that Iraq and Saudi Arabia supply to the world’s biggest oil consuming region.

“Our decisions on what we do regarding the purchase of oil or other things related to that will be guided by our energy security requirements,” Ministry of External Affairs Spokesperson Arindam Bagchi told reporters on Friday. “So that we have been saying and will continue to follow that and pursue that.”