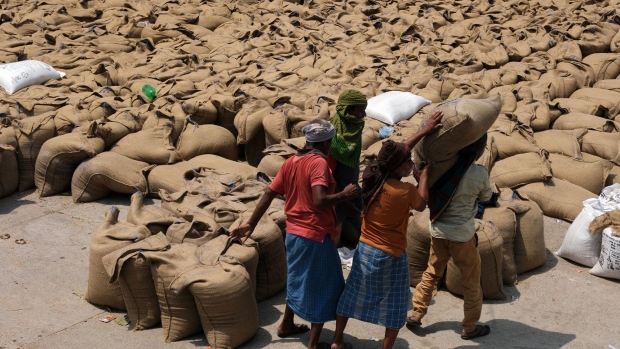 Laborers loading up wheat sacks on a truck at the grain market in the Khanna district of Punjab, India, on Saturday, April 30, 2022. A blistering heat wave has scorched what fields in India, reducing yields in the second-biggest grower and damping expectations for exports that the world is relying on to alleviate a global shortage. , Bloomberg

(Bloomberg) -- India prohibited wheat exports that the world was counting on to alleviate supply constraints sparked by the war in Ukraine.

The government is committed to ensure the country’s food security, the Directorate General of Foreign Trade said in a notification dated May 13. India will still permit exports on the request of other countries, it said.

Shipments with irrevocable letters of credit that have already been issued will still be allowed, the notification said.

Bloomberg News reported earlier this month that a record-shattering heat wave has damaged wheat yields across the South Asian nation, prompting the government to consider export restrictions. The food ministry said earlier that it didn’t see a need to control exports, even as the government cut estimates for India’s wheat production.