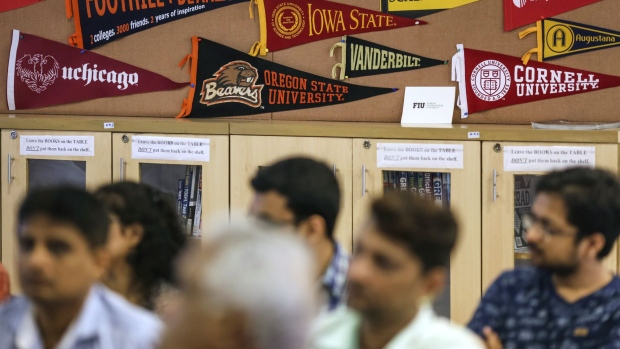 (Bloomberg) -- India’s universities have produced chief executive officers at companies from Microsoft Corp. to Google -- now Prime Minister Narendra Modi thinks they can be even better with competition from global names like Yale, Oxford and Stanford.

The legislation -- which will regulate the operation of foreign universities -- is being prepared for approval by the parliament, where the government retains a significant majority. It represents a change of heart for the ruling Bharatiya Janata Party, which has long resisted opening up the country’s education sector.

“There has been lot of enthusiasm,” Pokhriyal said, noting that Australia’s government and some universities had shown interest in the proposal. “Very soon, India will have some of the finest, world-class institutions.”

Pokhriyal is optimistic that overseas universities will set up their campus in India to tap the nation’s young demographics, with the World Bank projecting 34% of its population will be aged 15 and 34 years by 2021. India had already entered into agreements on educational programs with 55 countries that include exchange of academics and students and cooperation on other initiatives, he said.

The South Asian nation needs to boost its education sector to become more competitive and close the growing gap between college curricula and market demands. It’s currently ranked 72 among 132 nations in the 2020 Global Talent Competitiveness Index that measures the nation’s ability to grow, attract and retain talent. The minister did not specify what incentives India will offer to attract foreign universities, except that institutions, which are required to operate not-for-profit, will be on a playing field with local players.

But India’s notoriously tricky bureaucracy may be the main stumbling block for foreign universities, along with difficulties in acquiring land, academic staff and adequate infrastructure.

Institutions including the University of Washington, London School of Economics, Massachusetts Institute of Technology and University of Western Australia said they have no plans of setting up campuses in India.

Still, others like McGill University and the University of Sydney are among those that confirmed to Bloomberg they’re looking to expand their partnerships in India through new courses or research programs.

“We’ll seek new opportunities to further pursue such collaborations as India’s new policy is implemented,” said Joe Wong, a vice-president at the University of Toronto, which has a tie-up with Tata Trusts and the Indian Institute of Technology Bombay.

It’s time for India to open up its tertiary sector, said T. V. Mohandas Pai, chairman of Manipal Global Education Services, who has done research on the country’s higher education system. “The main hurdle will be the actual regulations,” Pai said. “My concern is that the control-minded bureaucracy should not scuttle the execution of the policy by putting in unnecessary controls.”

With more than 51,000 institutions, India’s higher education system is already one of the largest in the world and in terms of enrollment, it is second only to China. Still, it lags behind China in terms of infrastructure, quality teaching, and research investment.

“Finding suitable land and obtaining sufficient capital, ensuring necessary infrastructure, and -- importantly -- attracting and retaining qualified academic staff are all hard to do, even in places like Malaysia or Singapore, where there are existing branch campuses of Australian universities,” said Ian Hall, a professor of international relations at Griffith University in Queensland.

While the federal government delayed its reforms, some universities have already set up partnerships with Indian institutions, allowing students to partially study in India and complete their degrees on the main campus abroad. The current move encourages these overseas institutions to set up campuses without local partners.

“We have been dreaming about the possibilities of delivering degrees in India,” said Alessandro Giuliani, managing director of SDA Bocconi Asia Center, an Italian business school that operates in Mumbai, adding the institute is waiting to see the government’s final regulations in the new policy, which it hopes will avoid any minimum investment requirements, especially in land.