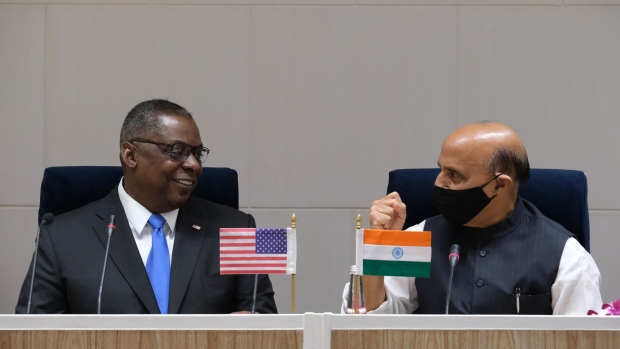 (Bloomberg) -- India’s top military official says the country plans to seek help from the U.S. and other countries to shore up its defense infrastructure that is vulnerable to China-backed cyber-attacks.

India is racing to develop capabilities, but even so, its critical and military systems remain highly vulnerable to breaches, Defense Chief General Bipin Rawat said at a seminar in New Delhi Wednesday. The matter was discussed during Secretary of Defense Lloyd Austin’s visit last month and it was decided to seek cooperation in the spheres of cybersecurity and artificial intelligence.

“We have to seriously look at catching up with China on technology,” Rawat said. “We may not be able to fully catch up with China therefore we are trying to develop a relationship with Western nations to see how best we can get support from them during peace time, at least, to overcome these deficiencies.”

Authorities are investigating a series of recent suspected cyber intrusions which could have led to a power outage in Mumbai, crippled systems at banks and caused a glitch at the country’s premier National Stock Exchange. The spate of attacks come amid a border stand-off with China which has continued for close to a year.

Soldiers from both sides remain at rifle-range at several points along their disputed 3,488-kilometer (2,167 miles) Himalayan border. India is already mulling a new national strategy to strengthen cybersecurity amid allegations of the Chinese intrusions.

Last month, Recorded Future, a U.S based private cybersecurity firm, warned Chinese state-sponsored hackers had targeted as many as 10 entities under India’s power grid as well as two maritime ports. A collapse of the power grid that supplies Mumbai brought the financial hub to a halt for several hours, impacting stock markets, transport networks and thousands of households is also suspected to have been carried out by hackers backed by China.