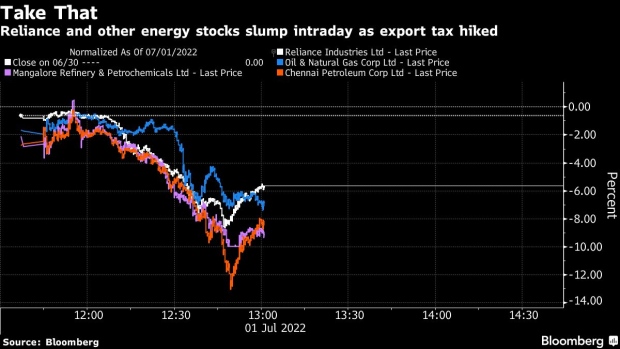 Reliance Industries Ltd. signage atop of a gas station near the company's oil refinery in Jamnagar, Gujarat, India, on Saturday, July 31, 2021. The Indian city of Jamnagar is a money-making machine for Asia's richest man, Mukesh Ambani, processing crude oil into fuel, plastics and chemicals at the world's biggest oil refining complex that can produce 1.4 million barrels of petroleum a day. Photographer: Dhiraj Singh/Bloomberg , Bloomberg

New Delhi imposed levies Friday that targeted overseas sales of gasoline, diesel and aviation fuel, according to a government notification, along with taxes on crude produced from domestic fields. They are effective July 1.

India is joining a growing number nations that are placing windfall levies on energy firms to cope with surging costs. The taxes are aimed at helping India shore up revenues as it faces challenges in managing its fiscal deficit, while sustaining growth and controlling inflation amid elevated commodity prices.

“The refiners export these products at globally prevailing prices, which are very high,” the finance ministry said in a statement. “As exports are becoming highly remunerative, it has been seen that certain refiners are drying out their pumps in the domestic market.”

Increased exports by some refiners was one of the reasons why state-run fuel retailers such as Indian Oil Corp. and Bharat Petroleum Corp. had been forced to step up imports of gasoline and diesel to cover shortfalls at gas stations.

The new taxes weren’t entirely unexpected as the government had cut fuel sales levies, causing it to miss out on a lot of revenue, said Deven Choksey, managing director at KRChoksey Investment Managers Pvt. Reliance has been in an exceptionally profitable situation, he said. “What you’re going to lose is the super profit. Normal profit you will continue to make.”

Reliance Industries slumped the most since December, erasing most of its gains this year. The heavyweight’s stock fell as much as 8.7%, dragging the benchmark S&P BSE Sensex lower. Shares of Reliance had risen almost 10% this year through Thursday, outperforming a 9% decline in the benchmark index.

The levies on crude production come with an increase in import taxes on gold -- a surprise move aimed at reducing purchases of the precious metal in the world’s second-largest consumer -- after the country’s ballooning trade deficit pushed the rupee to a record low.

India has also asked exporters of gasoline and diesel to meet local sales commitments to cover any domestic shortfalls. A drop in sales of Indian fuel overseas is likely to further tighten global markets that have been hit by reduced Russian supplies and a rebound in demand as more countries return from Covid-19 restrictions.

(Updates with government statement in 4th paragraph and more details throughout)