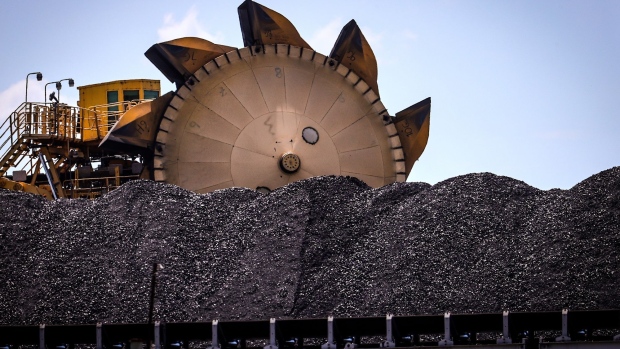 A bucket-wheel reclaimer stands next to a pile of coal at the Port of Newcastle in Newcastle, New South Wales, Australia, on Monday, Oct. 12, 2020. Prime Minister Scott Morrison warned last month that if power generators don't commit to building 1,000 megawatts of gas-fired generation capacity by April to replace a coal plant set to close in 2023, the pro fossil-fuel government would do so itself. Photographer: David Gray/Bloomberg , Bloomberg

(Bloomberg) -- India is buying Australian coal that’s been stranded inside China for months, according to people who have made the purchases, spotlighting how geopolitics is complicating Beijing’s battle against an energy supply crisis.

The fuel is being bought at a $12 to $15 a ton discount to fresh shipments from Australia and is some of the cheapest thermal coal relative to its quality on the market, said the people, who asked not to be identified because they aren’t authorized to speak with the press. Indian cement makers and sponge iron plants are among buyers that are using the supplies to bridge domestic shortfalls.

The development reflects the extent to which China-Australia relations have soured: China is battling a crippling energy crunch that’s set to get worse as winter sets in, and yet it won’t touch coal from Australia due to a geopolitical squabble. Indian firms have bought nearly 2 million tons of Australian thermal coal that has been sitting in warehouses at the Chinese ports, the people said.

Stockpiles of the fuel at Indian coal-fired power plants, which produce nearly 70% of the country’s electricity, are near the lowest levels in four years and have prompted the state-owned miner Coal India Ltd. to direct more supplies to domestic utilities. That’s reduced shipments to other consumers, including aluminum makers, cement companies and steel mills.

Prices for Australia’s Newcastle coal, considered an Asian benchmark, have surged close to a record.

The discord between China, the world’s largest consumer and importer of coal, and Australia had stranded as many as 70 ships and 1,400 seafarers waiting to discharge their cargoes outside Chinese ports in January. Most vessels subsequently discharged their cargoes or diverted to other destinations.