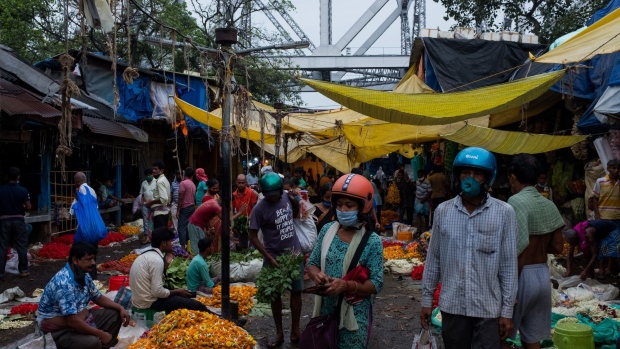 Shoppers wearing protective masks walks past vendors at Mullick Ghat flower market in Kolkata, India, on Tuesday, Sept. 22, 2020. India’s economic recovery prospects have gone from bad to worse after the nation emerged as a new global hotspot for the coronavirus pandemic with more than 5 million infections. , Bloomberg

India and Sri Lanka’s leaders agreed to work closely on trade and investment to deal with the impact from the coronavirus pandemic.

India has extended a $400 million currency swap facility to Sri Lanka to assist with economic recovery and tackle disruptions as a result of Covid-19. Both sides are discussing a bilateral currency swap, while technical talks on Sri Lanka’s request for a deferment of debt repayment are ongoing, Narang said.

The Sri Lankan prime minister’s first high-level meeting since his re-election is expected to help reset ties between the two neighbors at a time when India is seeking to counter China’s influence in its immediate neighborhood. The island nation had heavily depended on China for its infrastructure development during Rajapaksa’s previous 10-year rule as Sri Lanka’s president that ended in 2015, creating tensions with New Delhi.