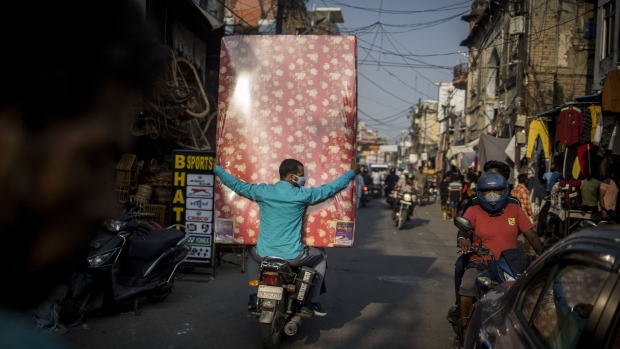 A rider on a motorcycle carries a mattress at a market in Lucknow, India, on Wednesday, Oct. 13, 2021. The Reserve Bank of India expects the months-long festival season to bolster urban demand in the second half of the financial year to March 2022, while rural demand will likely be buoyed by a robust monsoon and record food grain production. Photographer: Anindito Mukherjee/Bloomberg , Bloomberg

(Bloomberg) -- India unveiled inflation-fighting fiscal measures estimated to be worth $26 billion, including cuts to fuel taxes and import duties, adding pressure on government borrowing and bonds while joining efforts by the central bank to tame price pressures.

The steps announced over the weekend by Prime Minister Narendra Modi’s administration come as inflation climbed to an eight-year high on commodities and supply-chain shocks and the central bank began raising interest rates for the first time in almost four years.

“The new measures could play a key role in easing price pressures,” Rahul Bajoria and Sri Virinchi Kadiyala at Barclays Plc wrote in a report to clients Sunday, adding that the central bank will likely still maintain its path toward tighter monetary policy.

India joins policy makers globally who are struggling to slow a surge in consumer prices that threatens their recoveries from the pandemic and risks tipping many economies back into recession.

As part of India’s plan to ease pressure on consumers, the federal government slashed levies on pump prices of gasoline and diesel, waived import tax on coking coal, which is used to make steel, and increased subsidies on fertilizers and cooking gas.

The lost revenues and higher spending are expected to add to the record borrowing program already undertaken by Modi’s government.

The new measures are estimated to cost 2 trillion rupees ($26 billion), analysts at Nomura Holdings Inc. wrote in a note Sunday, adding that this will push the budget deficit for the current year to 6.8% of gross domestic product, from the originally budgeted 6.4%.

The revenue hit from the fuel tax will likely result in an extra 1 trillion rupees of government borrowing, according to people familiar with the matter. Yields on the benchmark 10-year notes, which have surged over the past month after the RBI hiked rates, risk being pushed higher on concerns over the government’s mounting debt load.

The government’s steps follow a recent shift toward inflation fighting by the RBI, which announced a surprise rate hike earlier this month. The central bank is expected to continue raising rates as prices are forecast to cruise above its target for much of the year.

“Fiscal and monetary authorities are presenting a unified front in their fight against inflation,” Samiran Chakraborty and Baqar Zaidi at Citigroup Inc. wrote in a note Sunday.

India had earlier budgeted to raise about 14.3 trillion rupees through debt issuances in the financial year through March 2023. The entire borrowings are in local currency, with banks and insurance companies the biggest buyers of sovereign debt.