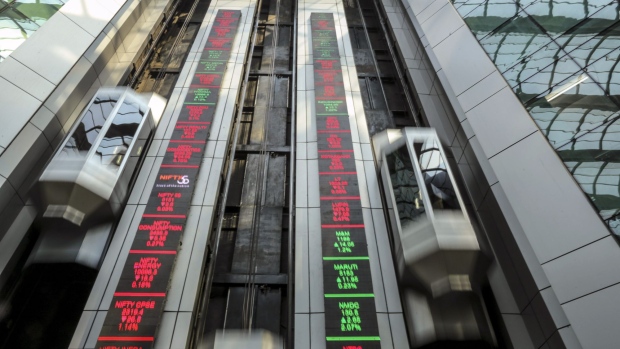 Elevators travel next to electronic boards displaying stock figures at the National Stock Exchange of India Ltd. (NSE) building in Mumbai, India, on Friday, Dec. 16, 2016. The NSE plans to file a draft prospectus this month for an initial public offering of about 100 billion rupees ($1.5 billion), pushing ahead with the nation's biggest listing in more than six years after its top executive resigned, people with knowledge of the matter said. Photographer: Dhiraj Singh/Bloomberg , Bloomberg

(Bloomberg) -- The rally in Indian stocks showed no signs of abating Wednesday as investors continued to bet that easing of the nationwide lockdown will reboot economic growth. The rupee gained for a fourth day, while sovereign bonds were steady.

The S&P BSE Sensex and the NSE Nifty 50 Index climbed at least 1% as of 10:09 a.m. to the highest in almost three months -- levels seen before the world’s toughest stay-at-home curbs were imposed late March. The Sensex is still down about 17% for the year, more than double the drop in the regional MSCI Asia Pacific Index.

“The buoyancy is due to the opening up of economy locally and on the global front as well,” said Ajit Mishra, vice president of research at Religare Broking Ltd. in Mumbai. “We were underperforming global markets, which had been rallying for almost three weeks whereas our recovery began last week. We are catching up.”

India’s easing of restrictions will see malls, restaurants and places of worship reopening from June 8 as the country attempts to revive an economy that’s headed for its first full-year contraction in more than four decades. The exit plan comes even as the country, which has the most number of infections in Asia, has been unable to flatten the curve despite the sweeping and strict lockdown.

Moody’s Investors Service on Monday lowered the country’s sovereign rating by a notch to the lowest investment grade, which may undermine the nation’s efforts to attract foreign capital into its debt market to fund a ballooning fiscal gap and avoid the first economic contraction in more than four decades.

IHS Markit is set to announce its measures of India’s dominant services industries, which makes up more than half of India’s gross domestic product, later in the day.

Meanwhile, Mumbai is bracing for a cyclone that is likely to disrupt business in a city that’s already facing the brunt of a virus outbreak. The outbreak in the nation’s financial hub has snowballed, with the city now accounting for more than a fifth of India’s over 5,800 deaths and about 207,000 infections.