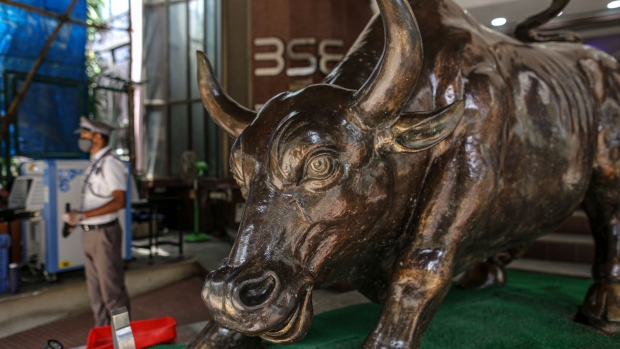 A bronze bull statue stands at the entrance to the Bombay Stock Exchange (BSE) building in Mumbai, India, on Wednesday, May 26, 2021. Money managers are counting on a consumption-led economic rebound from the world's worst coronavirus outbreak and the nation's long-term growth prospects to support corporate earnings and equity valuations. Photographer: Dhiraj Singh/Bloomberg , Bloomberg

(Bloomberg) -- Indian stocks are expected to move in a “calibrated manner” after the benchmark index more than doubled since March last year, driving up the valuations, according to Girish Pai, head of research at Nirmal Bang Equities Pvt.

BSE Sensex index had touched the 60,000 mark for the first time on Friday, driven by optimism for recovery in businesses as Asia’s third-largest economy administers record Covid-19 vaccinations. The index has risen about 25% this year and is one of the best-performing benchmarks among major global markets.

“60,000 is just a number, we are probably on this journey toward much higher levels over the long term,” Mumbai-based Pai said in a Bloomberg Television interview with Rishaad Salamat and Haslinda Amin. “In the very near term, the markets are a bit exuberant and the valuations are a little rich.”

Millions of first-time investors have been fueling the rally as they seek exposure to riskier assets amid declining returns on traditional investments such as bank deposits.  Global funds are riding the wave, having poured nearly $9 billion into Indian stocks, even as they pull money from countries like South Korea and Malaysia.