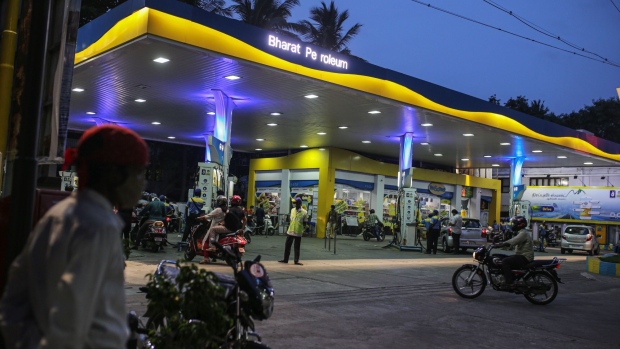 (Bloomberg) -- India’s plan to privatize Bharat Petroleum Corp. has run into rough weather with bidders struggling to find partners and spread their financial risks, according to people familiar with the matter.

The three suitors -- the Vedanta group and Apollo Global Management and I Squared Capital are talking to global energy giants and sovereign and pension funds, but haven’t been able to finalize partners, the people said, asking not to be identified as the deliberations are private. Some bidders are finding it difficult to invest due to sustainability rules that make it tougher for them to buy a stake in an oil refiner, some of the people said.

The fresh hurdle to sell government’s entire stake could temper some of the euphoria generated by the recent sale of Air India Ltd. to the Tata Group and slow down the nation’s biggest privatization drive. The sale of the state-run refiner-cum-fuel retailer would have fetched about $13 billion to the exchequer and other shareholders.

The massive price tag means bidders as well as the Indian government want a consortium with stronger technical and financial muscle for the transaction, the people said.

Spokesmen at the finance ministry and BPCL were not immediately available for a comment while Apollo Global declined to comment. Representatives at Vedanta and I Squared didn’t reply to mails seeking comment.

For BPCL, the bidders have been slow in conducting due diligence as they wait for new partners to join, the people said. That will likely upend the federal government’s aim to complete selling its entire 53% holding in BPCL by the end of this financial year in March, for which it had planned to seek financial bids next month.

BPCL allowed bidders virtual access to its financial data early April, but it hasn’t progressed beyond exchange of few queries and some initial discussions with the state-run company’s management in the past six months.

“Bidders are conducting due diligence, but uncertainty over the bidder consortium and process complexity, including valuation, may lead to potential delays,” Fitch Ratings Ltd. said in a commentary last month. “We believe the risks of further Covid-19 waves and global oil and gas companies’ increased focus on energy transition lead to additional uncertainty over the timing and valuation of potentially large acquisitions in the sector.”

BPCL has three refineries that can process about 700,000 barrels of oil daily and a marketing network of almost 19,000 fuel stations and close to 6,200 liquefied petroleum gas distributors.