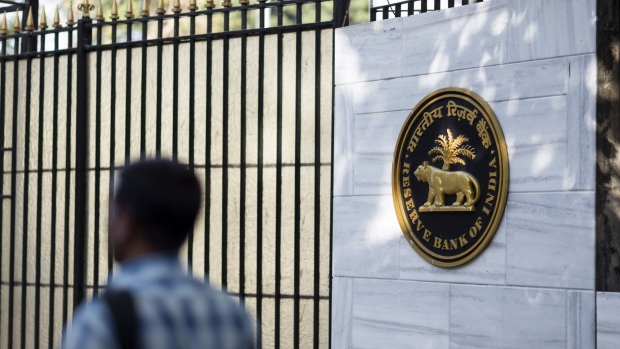 (Bloomberg) -- India’s central bank cut interest rates in an unscheduled announcement on Friday, ramping up support for an economy it expects will contract for the first time in more than four decades.

The benchmark repurchase rate was lowered by 40 basis points to 4%, Governor Shaktikanta Das said in a live streamed address. The reverse repurchase rate was reduced to 3.35% from 3.75%. The monetary policy committee met ahead of its scheduled meeting in early June, Das said.

The economy is expected to contract in the fiscal year through March 2021, Das said, as the impact of the coronavirus and measures taken to contain the pandemic severely affect domestic activity.

“After extensive discussions, the MPC voted unanimously for a reduction in policy repo rate and for maintaining the accomodative stance of the monetary policy as long as necessary to revive growth and to mitigate the impact of Covid-19 while ensuring that inflation remains within the target,” Das said.

The RBI last cut its benchmark rate on March 27 following an emergency policy meeting. Das said at the time that the RBI will continue to remain vigilant and would not hesitate to use any instrument -- conventional and unconventional -- to mitigate the economic fallout of the virus and preserve financial stability.

The economy is heading for a 45% contraction in GDP in the quarter through June, according to Goldman Sachs Group Inc., and facing a full-year decline as consumption -- the backbone of the economy -- collapsed due to the government’s strict stay-at-home measures.

High frequency data has showed that demand is virtually non-existent. India’s dominant services industries crashed last month, while car sales also collapsed. Large swathes of the population have been left destitute, with an estimated 122 million people losing their jobs in April, many of them daily wage earners, a survey by the private sector Center for Monitoring Indian Economy showed.